I woke up Monday morning wondering whether or not I’d be a Facebook status, the latest meme or some other form of viral sensation. My buddy Eric and I had done a pedicycle bar crawl in Philly the day before with Big Red Pedal Tours and I can’t remember the last time so many people (that I didn’t know) took my picture.

I guess I can’t blame them, seeing as Philly has never had a pedicylce before. What is a pedicycle you ask? It’s essentially a 15 person bike.  The “bus” or “pub” has seating on both sides and riders pedal to get from place to place (don’t worry, they have a driver to steer and  brake for you).  I’ve been fascinated with Pedal Bars ever since seeing one in the music video for Jerrod Neiman’s “One More Drinkin’ Song” and did a post of them last year.  At that point they mostly existed in the south and Midwest (I have friends who rode one in Nashville) so I was ecstatic when I stumbled upon the Big Red Pedal Tours website last month.

Jessica Tischer, the general manager of Big Red Pedal Tours was gracious enough to speak with me over the phone and answer some general questions about the company.

They’re just getting started, only having been touring within the past month.  Word or mouth and a sold out Groupon deal have meant they’ve had a steady clientele and bookings for weekend parties are filling up.  While most pedicycles are deigned “Pedal Pubs” Big Red Pedal goes with the “Tours” moniker because they not only offer barcrawls, but historical tours as well.

Both the barcrawls and historic tours run two hours. It costs $25 dollars a week to book individually and $29.00 on the weekend OR you could rent out the entire pedicycle (which again, holds 15) for $340, which is roughly $22.00 a rider (plus tip for your guides!).  I know Eric and I said we would have paid MORE and not felt ripped out in the least.

The company is based in Old City and picks up riders for the historical tour on Front & Chesnut.  They see the following sites (asterisks indicate a stop and explore destination):

I definitely want to take a historic tour in the future. Philly has such a colorful history and one thing I noticed when I explored Big Red Pedal Tours website and talked to Jessica, was just how much passion and pride they have for the city.  Jessica runs a blog on their website which showcases news and going on’s around town that I really enjoyed looking at.

The barcrawls run every evening and Sunday afternoons and Big Red Pedal Tours has no plans to let weather get in their way (which is very Pennsylvanian of them).  They plan on operating year round as long as the roads are clear of snow.

If I wasn’t already stoked enough to be finally riding a pedal bar, I then learned the itinerary: Irish Pub, McGillin’s and Mac’s Tavern, literally three of my favorite Philadelphia bars.  I mentioned this to Jessica and she said that the owner had envisioned a full Irish bar crawl  which is right up my alley.

Though not a technical “stop,” the tour begins at Brownie’s Irish Pub at 46 S. 2nd St., right in the heart of Old City. We’d booked a Sunday tour and arrived well before the advised “half hour early” so that we could catch lunch and a few drinks.; wIngs and Guinness is never a bad start to any proper Sunday Funday. I’d never been to Brownie’s before but enjoyed it’s no-frills Irish authenticity and dug the musical selections they were playing–I finally got to hear Roy Orbison’s “Only The Lonely” aka what a fellow patron reminded me was “Roy Orbison singing for the lonely…”

At three, our guide came in and rounded us I and the other 8 riders up.  The pedal pub was parked outside and after signing a waiver assuring we wouldn’t throw things (or ourselves) off during our time, we started pedaling. Our driver asked if anyone had brought a playlist, which they would’ve been more than willing to put on, which is awesome (they ended up playing their own 90’s mix, so can’t complain).  You can also bring food and non-alcoholic beverages aboard with you.

Word of warning: do not wear flip flops (I did because I’m slow  and almost lost them several times) and make sure that everything in your pockets is secured.

I’ll be honest with you, it takes a bit of effort to get this bad boy moving and I’d be remiss if I didn’t mention I felt some burning in my calf muscles, but all in all, with so many people, the pub basically pedals itself.  The first ride, between Brownies and Irish Pub is the longest trek of the trip and almost immediately I started getting used to what a celebrity’s paparazzi filled life is all about.  As soon as we’d drive by, people would stare, get out their phones or start yelling to us which was fun, and got more fun the more drinks we filled up on (although sitting at a red light while tourists take your picture is sort of uncomfortable).

Irish Pub was our first stop. You get about 20 minutes at each bar and receive a tour sticker that gives you beverage specials.  Irish Pub was a fun throwback for me.  My sister went to Drexel and she and her friends were obsessed with going there, I don’t think I’ve been back since she graduated.  I didn’t take advantage of any of the specials (I had a real heavy pumpkin beer at lunch so stuck to Coors Light) but several people in our party were knocking back car bombs. 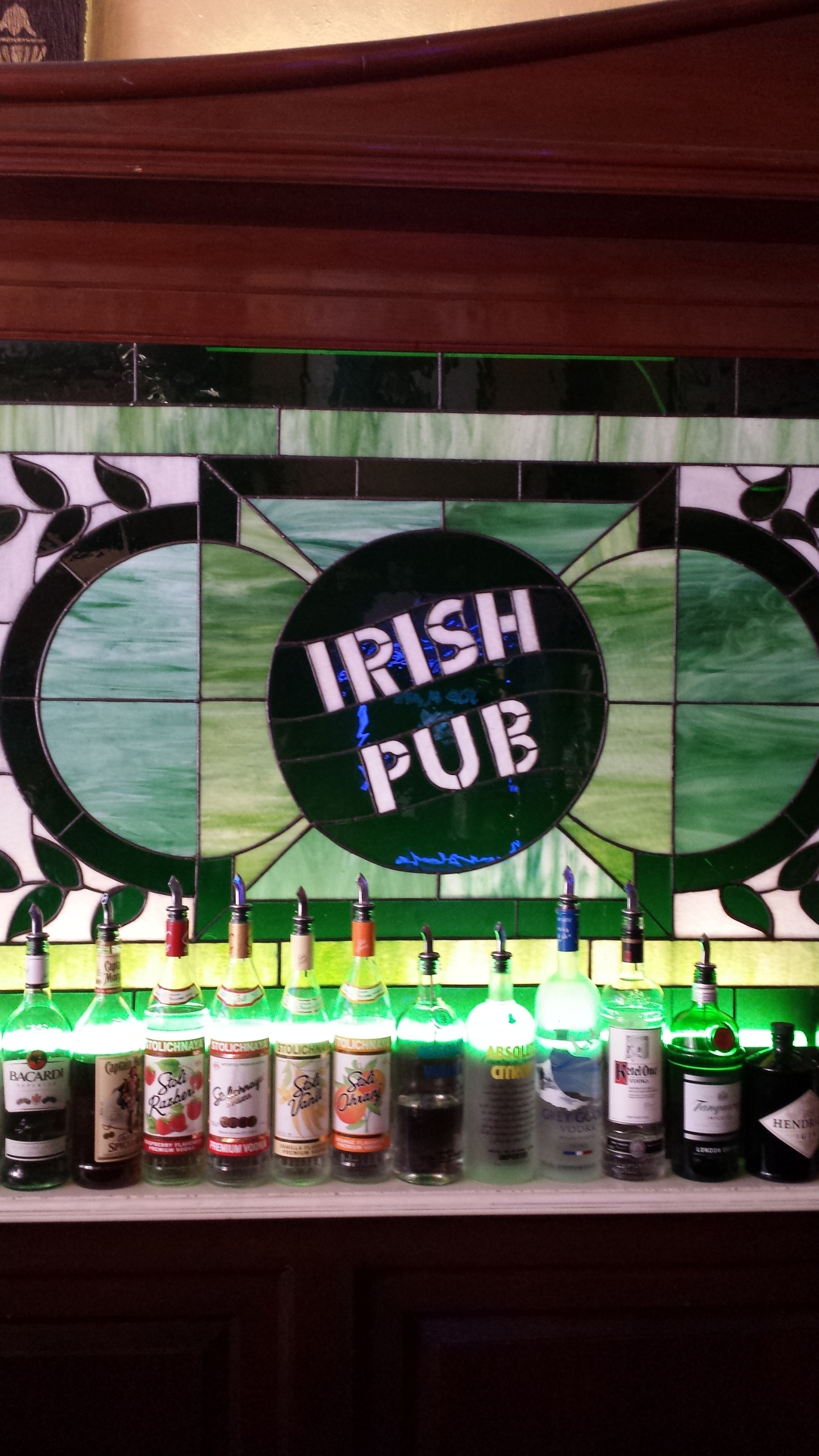 McGillin’s was the next port of call and probably the most fun ride because the tiny streets and alleys you navigate puts you in very close proximity to the pedestrians and the pedicycle pulls right up to the door, giving you an audience for your grand entrance.  I love McGillin’s and If I lived in Philly I’d probably lose a lot of money and brain cells there.  It’s the oldest operating bar in Philly, plays great music, has great food and drink specials and a low key fun crowd.  We ordered two McGillin’s ales and also got a round of sweet #Sunday Funday tee shirts for a thrifty 15 bucks.

My only complaint about the barcrawl was that when we reboarded the bus to  head to Mac’s Tavern (our last stop) I felt like I was just getting started (not a bad complaint, in reality).  I could’ve easily kept drinking and pedaling for a couple more hours and on our ride over, we brought this to our tour guide’s attention who said that if we wanted we could probably book back to back tours extending our two hours into four (if you were going to rent the whole thing).  This would only set everyone back $44.00 dollars, which in my opinion, would be well worth it.

Mac’s Tavern is just around the block from Brownies and owned by Rob McElhenney and Kaitlin Olson who play Mac and Dee (and are married in real life) on It’s Always Sunny in Philadelphia (The Paddy’s Pub crew going on a pedal tour is something I think we need to see), I like Mac’s Tavern because amidst all the Old City trendiness and clubbiness, Mac’s reminds you of a neighborhood joint.  It’s also the perfect bar size, not so big as to feel overwhelming but not so small you can’t move. Our driver gave us the option of having a beer and then pedaling back to Brownies or simply letting us stay at Mac’s, which we opted to because I was hungry again.

I ended my Sunday the same way I started it: with a pint of Guinness and some buffalo sauce (shrimp this time, instead of wings).  I highly recommend experiencing the Big Red Pedal Tour.  If you’re anything like me, you’ll be planning a return trip as soon as you finish you first.