By brothwellp2 in Lake Placid, Upstate NY, Winter Fun on March 7, 2017
One comment

I’ve written about Lake Placid countless of times before. It’s definitely my favorite winter getaways, and probably my favorite repeat trip, just because there’s always something new to do, the town itself is so much fun to go out in, and the Adirondacks are so stupidly picturesque. I considered not even writing any posts about the four day trip up there I’d just returned from in order to not be repetitive (and to try and stick with my New Years Resolution of focusing more on PA destinations), but it was such a good trip, and the pictures came out so well, that I just really want to share.   In order to not give you a play by play tutorial of a lot of things I’ve already touched on, I’m going to do this blog as more of a photo-essay, because while the writing can often become redundant, I don’t think you can ever look at too many Adirondack photos. I’m lucky that my brother Shawn and friend Jacki took such a bevy of pictures, as my photo taking skills are abysmal at best.

I have morphed from the biggest, chronic over-packer in the world, to someone who can pull of a three day road-trip through Wisconsin using only what’s in a carry-on backpack. That being said, there’s no way to pack light for a ski trip, especially with the temperature fluctuations we’ve been going through.

We left for our four-day trip at 5AM Saturday morning. It’s a five-hour drive for us, and we were planning on doing a 5 hour XC ski in the Adirondack Park. It was somewhere circa 60 degree when we left, which sort of makes it hard to get excited for a winter vacation, but by the time we passed Albany, we started seeing quite a bit of snow.  Then we got off the Lake Placid exit and watched with sinking hearts as it slowly disappeared.  We stopped at the Cascade XC Ski Center just outside town to ask about the conditions. They said that it was ski-able, but if it rained that afternoon (as it was forecasted too), it would most likely all disappear, so we decided to just pay the $12 fee and get a few runs in there before it was all gone for good. This is my first, sad shot of the trip. 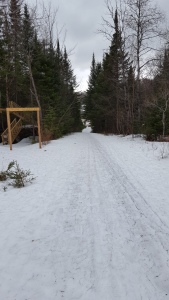 This is my second shot of the trip, and the first trail we took.  Check out the zip-line to the left that Cascade has recently added for some summer fun.

This was one of my brother’s first shot of the trip on the car ride in. Still sad, if we’re talking about no snow, but a great picture of the Adirondacks.

The skiing didn’t end up being bad at all. Here’s our first great view of the high peaks. 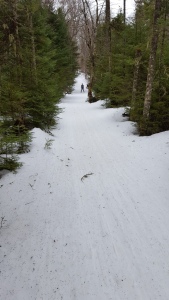 And here’s coming down our first hill, plenty of green still visible.

And here’s my first glamour shot of the trip, with an ever better view of the high peaks in the distance. Really, you can’t get mad that the conditions were only ok, with views like that.  Also notice my attire: my new favorite activity is short-sleeved XC skiing.

After our morning XC ski, we decided to take on a hike, and picked Mt. Jo, not a high peak, but a small mountain next to the Adirondak Loj, that boasted great views of said high peaks. The trail was super icy, but the views really were worth it. Here you can see the cloud covered top of Algonquin, a peak my brother and I conquered two summers ago.

One of the perks of a super icy hike were these incredible icicles stuck to the side of the mountain.

This is a great shot of my brother, and our college roommate Eric on the top of Mt. Jo. It was nice of them to color coordinate.

And here is me bracing myself into what were becoming gale-force winds.

You might not care, but this is my favorite group shot of our trip. That’s me and my brother,  Eric, our high school friend Jacki, and her boyfriend Duke. Trips are often made or broken by those you travel with, and this was a great group brought together by our shared love of winter activities, cheese plates, and sharing massive amounts of appetizers. Now, we descended Mt. Jo right as the aforementioned rain decided to strike.  It poured, and we drove into town thinking about what kind of plan B we’d have to come up with for the rest of the weekend. To cap that off, a massive windstorm accompanied the rain, and when we got to town the power was out. Jacki and Duke were already checked into the room, casually drinking in the dark, and after unloading our things, we decided to go find ourselves some food. After a soaking wet one block walk, we ended up at Top of the Park, a great little small plate restaurant with a nice deck overlooking Mirror Lake. We couldn’t get hot food, but were able to score some chacuteries, cheese, a cold chocolate torte, tons of crackers, and a few adult beverages. You obviously can’t tell from the strong flash in this photo, but all of this was done by candlelight. It ended up being a really cool experience. 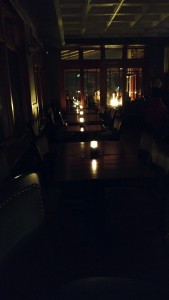 Here’s a view of the bar with no flash employed. That’s some grade-A darkness.

Here’s a perfectly candid, not at all posed picture of me silhouetted by the lights of the passing cars. We spent quite a bit of our time watching insane/possibly severely mentally damaged people run in front of cars barreling down a snowy hill. Yup, the powers that be decided to give us a winter trip after all, and about an hour into our makeshift dinner the rain transitioned into about 6-8 inches of wet snow.

Top of the Park said they were closing around 7:30, so we ventured out into town to see if anything else was open. Lake Placid is a tourist town. We figured one of the bars had to have a crowd, but wandered the dark, snowy streets to no avail. My brother took this awesome shot of what essentially was a snow-covered ghost town. 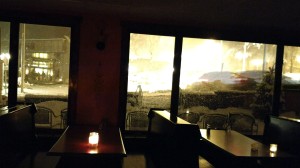 Here’s the second dark bar we ended up at, which contrary to how it looks, was not in fact across the street from a firestorm, but rather the only hotel with a generator in the lobby.  Mis Amigos was located on the bottom floor of our hotel, just underneath the lobby. It’s not the hotel restaurant, but rents space there. After wandering darkened main street with no luck, we returned to our hotel, figuring we’d just maybe have a couple beers in the room, and pass out early, but noticed that Mis Amigos was filled with lit candles, and that there was a fire burning outside on the patio, so figured we’d press our luck.  Mis Amigos was both our salvation and our downfall.  I did not go to bed early.  I did not just have a few drinks, and I can 100% say, with no reservations, that I had more tequila that weekend than I’ve probably ever had in my life. If you’re in Lake Placid, you have to check it out. The owners were so nice and welcoming, and I wish I got to try the food. Unfortunately you can’t cook with no power, so we simply ate our own hoagies from the room there, and even, sinful as it was, brought our own salsa and chips into a Mexican restaurant.  We ended up stopping here for our nightcaps the next two nights.

Any bar that lets you borrow their sombrero is alright in my book. You could also see how much I love tequila. 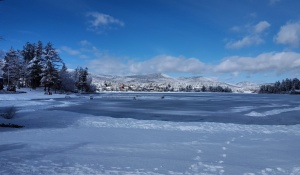 Mirror Lake (downtown Lake Placid is actually situated around Mirror Lake, with the bigger namesake Lake, on its western outskirts) looks awesome with a fresh coat of snow. This was taken as we waited outside the Lake Placid Brewery for it to open for lunch. The power stayed out until about 11:00 AM, so most restaurants ended up opening late. 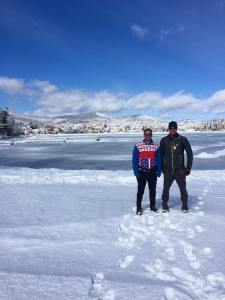 Here’s Eric and I posing in front of the same panorama.

Another great shot of Mirror Lake, now with sled dogs! 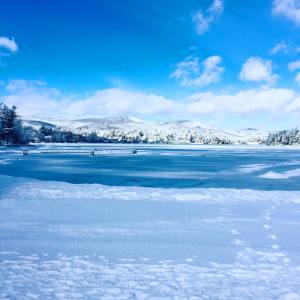 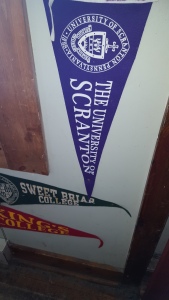 I was pumped to find my alma mater represented on the walls of the brewery.

I feel like the trip more or less could’ve been sponsored by Big Slide IPA.

Really, what a difference a day makes. This was Casacade XC Ski center on Sunday after the fresh snow.

XC skiing became a bit of an adventure since many trees were bent over like this in the snow.  It did score us half-price rates (a few trails were unpassable due to downed trees like this).

Towards the end, I’ll be honest, moving branches out of the way got a bit tedious.

But then there’s views like this that beat any branch-moving tedium!

Sunday night we had dinner at the new Big Slide Brewing Company, which a sister company of the original.

We returned to Top of the Park Sunday night and sat outside on their special fire tables. They supply you with blankets. We purchased our own beverages. 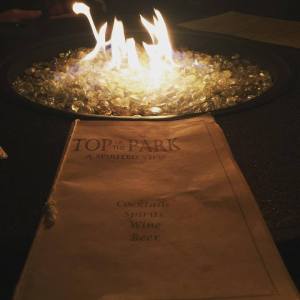 Jacki took this awesome shot of the menu and fire-bowl. We ended up splitting a super delicious truffle scented mac and cheese, served with some of the best garlic bread I ever had (and on the suggestion of our waitress, we piled the mac and cheese ON the garlic bread. Good stuff).

Monday Jacki, Duke, and I rented snowmobiles while Shawn and Eric hit up Whiteface. Farmhouse Snowmobiling was aptly named.

Here I am, getting ready to go.

I stopped mid-trail to take a couple pictures. We had snowmobiles growing up, but I haven’t been on one in years. I forgot what a great way it is to get outside and enjoy the winter weather. 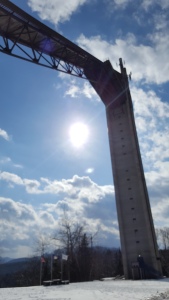 I’ve done the Lake Placid Ski Jumps before, but I really enjoy doing repeat trips.  This shot from right below really highlights how tall they are, and conversely how crazy those who ski down them are.

Another shot from below.

View of the high peaks from the jump platform.

I’m of the mindset that you should always take the tourist photo.

There’s something fun about being in a dark bar, and looking out and seeing daylight. It might be one of my favorite sensations. This is from the interior of Zig Zags, the town’s most unassuming, and most activity filled bar.

Tourist towns are dangerous places to drink, because almost all the bars are surrounded by shops. I almost purchased this Hamm’s sign for my bedroom. 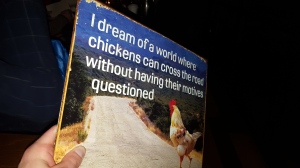 Luckily clearer heads prevailed, and I purchased this chicken sign instead. 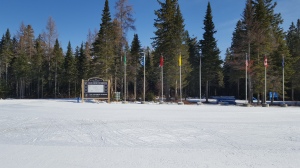 We capped of our trip by an early Tuesday morning ski at the Mt Van Hoevenberg Olympic XC Ski Center.

Till next time Lake Placid (which will probably be sometime this spring. I really cannot stay away).

1 comments on “Lake Placid in Photos”