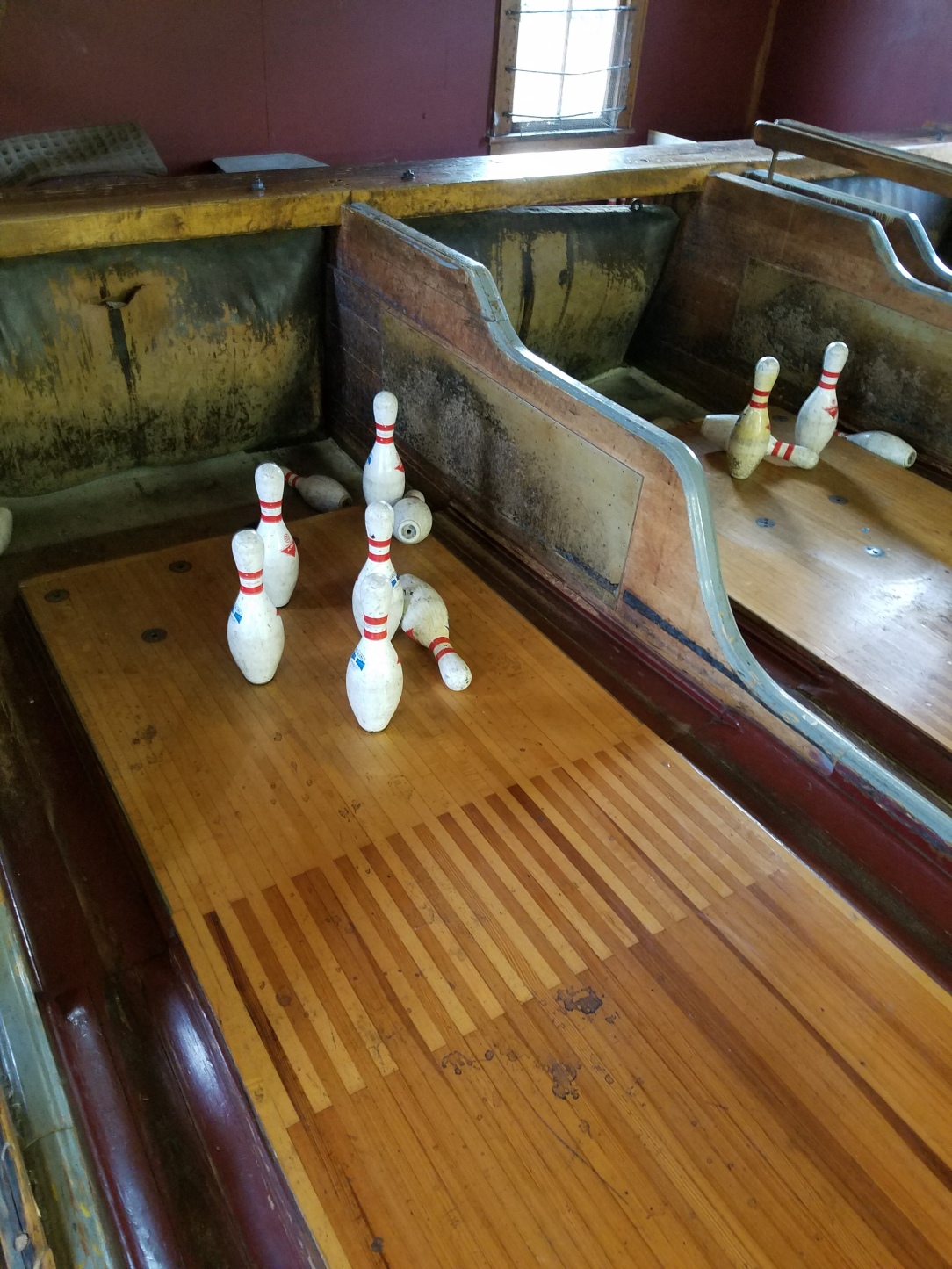 It’s become a tradition that the Saturday after Thanksgiving my friend Jacki and I go exploring new breweries.  It started two years ago when we decided to try out the then new Irving Cliff Brewery in Honesdale. I also went to the Hotel Wayne (great beer selection), and Kim’s (amazing wings) for the first time that day.  Last year we checked out some breweries/distilleries in New York’s Sullivan County. This year we sort of went for a hybrid, checking out some new places to eat and drink where the Delaware River separates Pennsylvania and New York (along a lot of the same drive I just did in the fall).

The first stop on our journey was the Callicoon Brewing Company, in Callicoon. New York. I used to actually celebrate Thanksgiving here as a young child at an aunt and uncle’s, before my parents took over as our family’s host house. I remember very little of those Thanksgivings, but I do remember being impressed with the long bridge that takes you from PA into New York. You know what? I must have been pretty observant as a child, as I was impressed by that bridge  last Saturday. I was impressed with Callicoon too. Like many of these small Catskill towns, it seems to be going through something of a renaissance, as they seem to be the vacation spot du jour for a certain sect of New Yorkers.

The Callicoon Brewery was fun.  That’s not always the case with breweries. I’ve been to plenty of good ones that have great beer, and great food, but aren’t someplace I’d want to spend more than an hour, you know? I could easily have seen parking ourselves here around lunchtime and not leaving till after dinner. You know how Applebees or TGIFridays, or INSERT ANY CHAIN BAR HERE, tries to capture some feeling of Americana you’re not actually sure exists, with all sorts of weird trinkets and memorabilia hanging on the walls (ALWAYS a taxidermied jackalope), but it always feels forced, and thus fails at capturing said feeling of American you’re not actually sure exists? The Callicoon Brewing Company captures that nostalgic Americana in spades. There’s a life-size Betty Boop that immediately greets you as you walk in the door. The walls are adorned with vintage brewery signs, beer ads, and both real and fake taxidermy. They have a popcorn machine, and one of those shuffleboard/bowling hybrids, and a life size Uncle Sam sitting in a sleigh, driven by a fake cow above the bar. This could easily feel over the top, but it doesn’t. It felt authentic. I think mostly because you could tell that the people who were there (and it was pretty crowded for noon) weren’t beer tourists like us. They actually hung out there.  The CBC (I don’t know if anyone actually calls it this) only brews a few beers themselves, but the IPA I had was very tasty (so were the complimentary Goldfish…points for that). They also have a bunch of other beers on tap/bottle, including your regular Coors and Miller lite. I appreciate that. I appreciate people who like good beer, but don’t look down on those who want to drink the everyday stuff.  I’ll definitely be back. 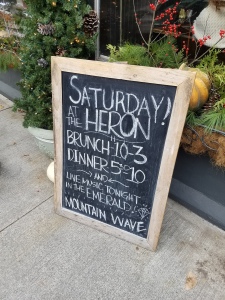 The second stop on our much longer than three hour tour was The Heron in Narrowsburg, a restaurant that’s been on my radar for a while. We met my brother there for brunch. The Heron is a tiny place that could’ve easily seemed cramped and overcrowded, but didn’t feel that way at all. In fact, the size gave it some of its charm. I know I’m being pretty effusive today, but I can’t help that I was pleasantly impressed with  everywhere we stopped Saturday. The Heron is right on Narrowsburg’s Main Street, and overlooks what I just learned through some googling is the deepest portion of the Delaware River. We sat at the bar and grabbed a drink while we waited for a table to clear out, and just judging by the prices I worried a bit.  The drinks are not cheap, and while I understand that farm to table places are typically a little more expensive, because of the logistics of being a farm to table place, a $5.00 can of Naragansett is pricey anyway you spin it. Luckily, the food was delicious, and worth every penny.  We shared an appetizer of fried queso with a chipolte aoli which was really good, and then I had scrambled eggs with cream cheese and chives. Good stuff. And you know how breakfast potatoes are normally an after thought, that you kind of pick at once you realize 2 eggs wasn’t enough to fill you up? I started eating mine first, and didn’t move onto my eggs until they were demolished. They were excellent.  You know what else I appreciated? I got a hot tea and was offered a Bigelow English breakfast blend-there was not a Lipton in sight (one of my biggest restaurant pet peeves is paying for Lipton tea #firstworldproblems). The star of the meal though was my brother’s order, which was chocolate peanut butter pancakes with home made whipped cream.  Both of us normally detest whipped cream, but were both slathering it on the pancakes (it was a very aggressive post-Thanksgiving order, so he was kind enough to give me half of one pancake).

I also want to add that The Heron played incredible music. I don’t know if it was the radio, or a mix, or what, but I’m never going to complain about hearing “For the Longest Time” during brunch.

Narrowsburg is a fun little town to walk around.  We stopped in a general store we’re all too poor for, a liquor store to purchase some Prohibition bourbon that we tasted on our tour last year, stopped to take a few pictures on the river viewing platform (and I think spotted an outdoor dining area for the Heron? Will need to look into more), and finally made it to One Grand Books, which I’ve written about before.  It’s a cool little shop, and one I could probably spend some time in when I don’t have other places to stop. I really like their concept, and probably would’ve made some purchases had I not just dropped bank at the liquor store. My brother and I are already talking about returning to The Heron for dinner. I also want to try Hennings Local in nearby Cochecton. And I want to try the pizza at The Launderette too. These upstate New York folk know how to eat.

Stop number three took us back to the Keystone State. We went to Rohman’s Pub in Shohola, which sits just behind the train tracks overlooking the Delaware River, directly across said river from Barryville.  Rohman’s is a treat.  It’s musty. It’s dark. The ceilings are low, and the crowd skews towards older, with a lot of leather, and a lot of motorcycles out front. It could’ve been the type of place where everyone turns and looks when someone new walks in, but it wasn’t. No one cared, and people were friendly. Rohman’s also has an old school bowling alley upstairs that you can rent for as many people as you’d like for just $15.00. Now, you have to abide by a couple of rules. You can’t walk on the lanes. You have to close the windows and turn off the lights when you leave. You have to keep your beer on the tables near the lanes.  That’s it. You also have to reset your own pins, retrieve your own ball, and keep track of your score. We didn’t keep score, although looking back I wish I did, because I got two strikes. 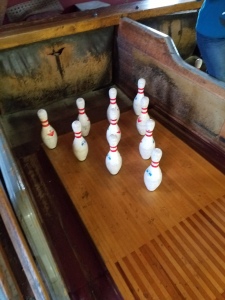 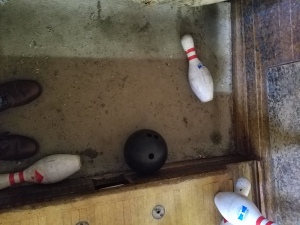 Although the lanes themselves are remarkably well preserved, the bowling room has the same dive bar aesthetic as the rest of the the place.  There’s an old school jukebox that only takes quarters. All of the songs predate 1990, with the one exception of Hootie and the Blowfish’s “I Only Wanna Be With You”, and the jukebox alternately blasts your music, and is barely audible.  The bowling room is not heated, so I’d take your coat if you’re there in the winter, and I’m assuming if you visit in the summer you should prepare to sweat.  My hands still smell like the bowling bowl I used, as I sit and type the first draft of this post Sunday morning. I’ve showered twice since handling that.  One errant bowling shoe sat in the middle of the floor. The place may not have been dusted prior to 1990, either. I was in the love.

Our last major stop of the night was the newly opened Wallenpaupack Brewery, and I’m going to have to return here, because at this time in the night I was sufficiently full after a day’s worth of drinking and eating to really give it the proper college try.  We each got one IPA, and both were good (Jacki had a hazy New England style on that I liked better than mine).  We split a burger and chacuterie, and attempted a flight, but didn’t eat the entire board, or finish the entire flight. I don’t know this person who gets too full all of a sudden. Old age is hard guys. Except when it’s glorious, and you’re in bed watching Netflix by 9:30. That’s becoming a priority I can live with. Wallenpaupack Brewery, you deserve more details and better photographs. Like everywhere else I stopped today, I’ll be back.