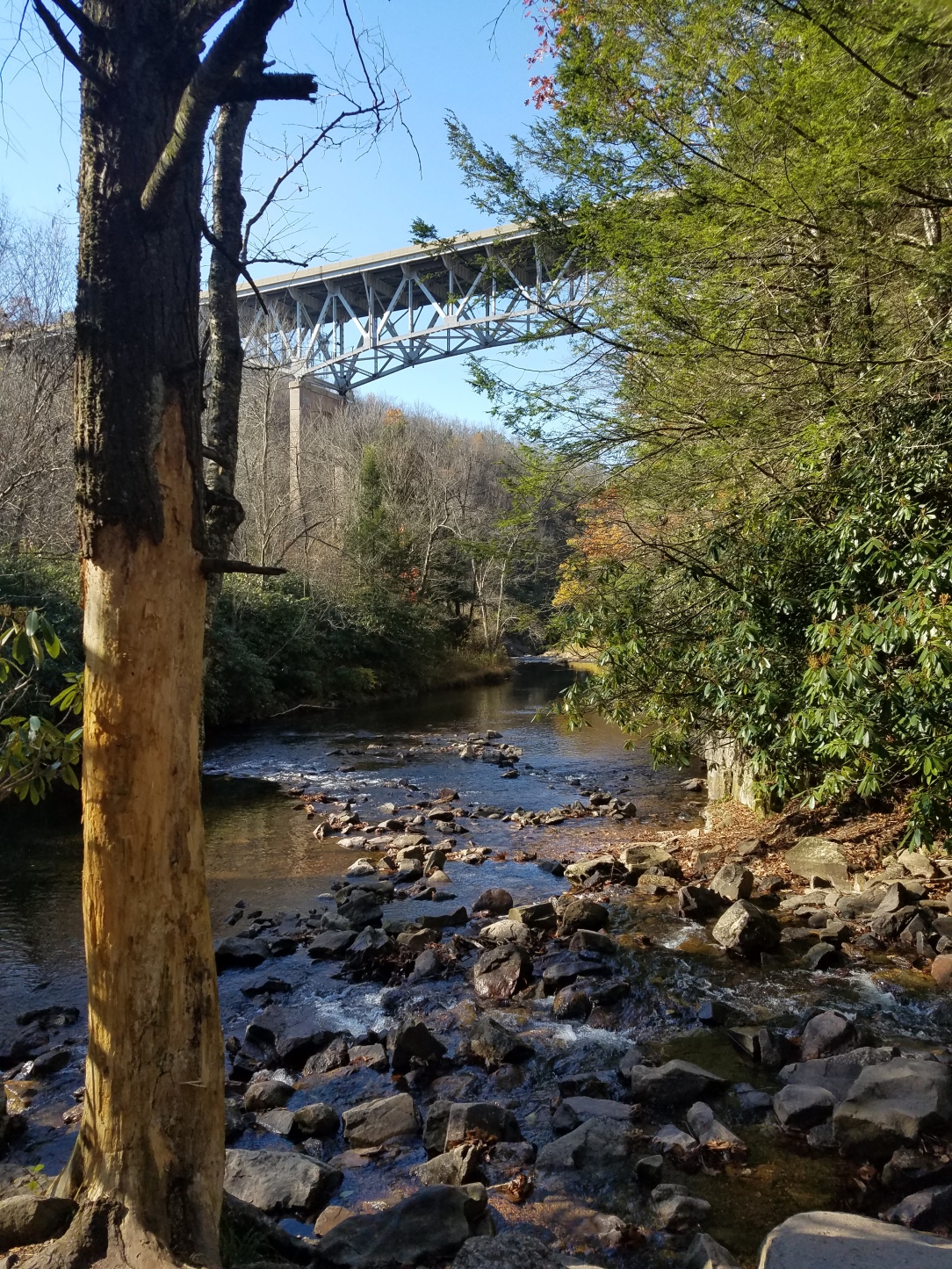 The hike to Hawk Falls in Hickory Run State Park is a particularly beautiful one, especially in the fall, and especially on a sunny, crisp, 50-something degree day like this past Saturday.  It’s a gentle downhill descent through an abundance of multi-colored foliage, the bulk of which hadn’t yet been shed (shout out to global warming!). The last part of the hike is on a pleasant, stream-side trail, which gently pivots through what can only be described as a rhododendron tunnel, before ending near a small pool at the base of the falls.  It was empty when we arrived last Saturday, devoid of of other hikers. I was pleasantly surprised. We’d passed a number of people coming the opposite way, and the parking lot was more or less full. You’d think that the spot where a cascading waterfall, meets a babbling brook, under a canopy of golden hued leaves would be practically Thoreauvian. Well, then you’d probably be unaware that you can’t take a picture of the spot where the cascading waterfall meets the babbling brook, without being photobombed by a large bridge, which carries the Northeast Extension of the Pennsylvania Turnpike over said babbling brook, or that that roar of the falls does not adequately cover the noise of said bridge’s steady traffic. It’s a funny juxtaposition, and in some cases, not an unlikable one.

My brother and I went hiking in Hickory Run State Park this past weekend. We spent a good chunk of the day there, exploring both the Hawk Falls trail, as well as the longer Boulder Fields Trail.  Despite living in a state with a pretty robust State Park network, as well as running a PA-centric blog, I’ve been to an embarrassingly low number of Pennsylvania State Parks. It’s part of the reason I wanted to check out Hickory Run on Saturday. I also didn’t want to spend half my day in the car. Regardless of the reason, it was a solid choice. 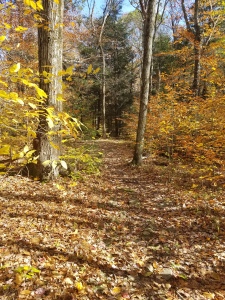 My brother and I have been lucky enough to spend quite a bit of time hiking in the Catskills and Adirondack parks these past couple of years, which probably accounts for how little time I’ve spent in PA’s state offerings. That wasn’t always the case. When I lived in Lancaster, I did a lot of local hiking, and had a hiking bucket list that was mostly in-state. Then we started hiking more, and for me it transformed from something I did when I had a few hours to kill on Saturday afternoon, to something I built entire weekends around. While I feel like a douche admitting it, it’s turned me into something of a hiking elitist. I now crave panoramic views from 4600 feet. I yearn for alpine zones that dip above the treeline.  I want elevation gains that sound impressive when I casually drop them into water cooler conversations Monday at work, and backdrops that are the reason the #nofilter hashtag exists. I love the exhaustion, and good kind of sore, that overtakes your body the next couple of days. It’s admittedly not a great way to be. I started this blog because I thought, and still think, that Pennsylvania is awesome, but often overlooked for “cooler” places. Now I chase those cooler places, at least hiking wise. I tout them more than my blog’s home state, and write introductions on said blog where I try and be pithy about PA hike’s short comings. It taps into something gross about my personality that I’ve always suspected, but never quite proven, which is that I’m the kind of guy who makes fun of something, until he’s achieved it, and then does a complete attitude reversal.  Like, I’m the guy who will always proclaim, “I’d have abs if it weren’t for dairy, bread, and beer.” I truly think now, that if by some feat of God, I someday do develop visible abs, then I’ll all of a sudden go gluten free, keep a food journal, and eschew both beer and dessert.  With that in mind, this hike was a little of a come-to-Jesus moment. It brought me down off my high horse , and showed me that a leisurely stroll through a Turnpike-pocked state park could be just as enjoyable, as a jaunt through the Catskills.

That all being said, I was super cognizant of the traffic buzz when we set off on the Hawk Trail, but it stopped bothering me when I realized the benefits it could have. Hawk Trail is the most elementary of hikes, truly something people of any age or fitness level are able to enjoy, but, as I pointed out early, it is very pretty scenery, despite the umbrage of the Turnpike, and the waterfall is very scenic. It’s also very accessible. You’re able to climb to the top without endangering yourself. You could get great shots on the top without being stupid or reckless. The spill pool is swimmable, not on a chilly October day mind you, but in general, and I couldn’t help thinking this would be a great place to visit in the summer. The short length of the hike means that you could spend the bulk of your time swimming, or reading on the shores, relaxing and enjoying nature without putting forth a ton of effort. That’s underrated. Not having to spend an entire day finding a beautiful place where a babbling brook meets a cascading waterfall is underrated too, and it’s literally just off the Turnpike. Not only does the hike require minimal effort, but so does the journey there. Convenience is never overrated. 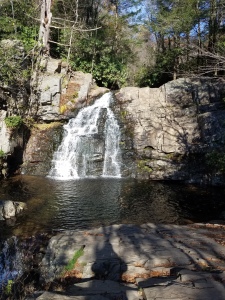 Speaking of convenience, Hawk Falls and the Boulder Field trail share a parking lot. I enjoyed being able to knock out two hikes in one day. The Boulder Field, Hickory Run State Park’s most salient feature, is an 18 acre field of boulders that was ostensibly created by glaciers hundreds of thousands of years ago, in a process I did not retain from high school Earth Science. For those of you less hiking inclined, there’s a parking lot on one side of the field. The other option is the Boulder Field trail, an up and back 6.2 mile hike through the northeast portion of the park. Like the Hawk Falls trail, this is absolutely a hike that people of any fitness level could enjoy. It meanders, slightly uphill, through a densely forested area, and although the beginning of the trail does have power lines cutting through the trees, and the Turnpike buzz in the distance, you soon do feel like you’re in the middle of a nature. Although we certainly passed many hikers, the trail wasn’t overrun. In fact, some of the Adirondack and Catskill hikes I tout do verge on the overcrowded.  This was nice. It was isolated. It was Thoreauvian, although I’m not sure why I’m pushing that word so hard today. I find him overrated.  It was, though, I remember thinking on our way back to the car, not so much a hike in the wilderness, as it was a walk through the woods, or a stroll through the forest. My legs disagreed though. So did my body. 6.2 miles is 6.2 miles, and I immediately took a nap when I got home Saturday, and decided to forgo the gym on Sunday due to that good sore feeling emanating through my body.

The Boulder Field is exactly as advertised. As my brother aptly captioned on a Instagram, “A field of rocks.” That’s what it is. It’s 18 acres of rocks of various sizes strewn on top of each other. It’s mostly level, so while you do need to balance to get across it, you don’t have to climb, and there’s a number of what you can only call pits, indentations in the general surface, that we found a nice place to plop down, and throw our bags while we rested. We didn’t stay at the Boulder Field long. We didn’t bring lunch, and there’s only so much sitting around on rocks surrounded by other people sitting around on rocks that you could do. It was cool, we decided, but had we driven there, and not done the hike, we might’ve been disappointed, yet we both decided on the ride home, that the longer we were away from it, the cooler it was.

I’ve been on plenty of cool hikes that yield great views, and foster good stories. Not every one of them is fun. Not every one of them is enjoyable. Sometimes they become work, a goal to overcome. The beauty about the Hawk Falls Trail and the Boulder Field trail is that both were fun. Both were enjoyable ways to spend an afternoon. Both are beckoning me back. As I said earlier, I’d love to tackle the Hawk Falls trail in the summer, and bring a book and swimsuit, and stay a little while. I’d like to tackle the Boulder Field in winter, not after a heavy snow necessarily, but when there’s snow and frost on the ground, and when the boulders aren’t buried, because that I think a light snow on The Boulder Field would be otherworldly in a very North-of-the-Wall way. I’d like to explore other parts of Hickory Run State Park too. They’ve got an intensive trail system, and have a few designated XC ski trails.

Hickory Run State Park was an easy day trip for us. We spent a total of two hours in the car.  It would make for a nice getaway though. It’s in driving distance of two of my favorite Pennsylvania hikes, Glen Onoko Falls in Jim Thorpe, and Mt. Tammany outside Stroudsburg. Both of these towns could also be destinations in themselves.  Me? I’d base myself near Lake Harmony, where coincidentally, I spent the prior weekend as part of my friend Eric’s bachelor party.  We rented a great ski house through Air BNB where we spent the bulk of the night hanging out and grilling. It’s not the Air BNB calling me back to Lake Harmony though, it’s a three-star Yelp reviewed bar and grill called Shenanigans that blew my mind two weeks ago. Shenanigans consisted of two equally amazing parts. The bar area, where you entered, had that manufactured corner bar flavor that Applebee’s has helped popularize, and the night we were there was filled with a very lubricated middle aged crowd taking karaoke very seriously.  The highlights were an inter-generational couple singing the Cheryl Crow, Kid Rock classic “Picture,” and the DJ, who was dressed like the preppy villain in an 80’s teen movie, who announced he was going to get the party started by singing a song the kids go crazy for, “How Sweet It is to be Loved by You.” The back bar was a “club,” where we witnessed frenzied dance floor makeout sessions by people who appeared to be our peers, and two separate fights that cleared said dancefloor. I haven’t seen a bar fight since college.  I loved every minute of it.  Like Hickory Run State park, Shenanigan’s, and it’s Jersey Shore in the Poconos sensibilities, is beckoning me back.

There’s absolutely nothing Thoreauvian about Shenaningan’s though. That’s 100% Hickory Run.