Over the last couple of years I’ve become something of a hiking snob.  The hiking here in PA used to be something I would cite as a top reason to visit here, however I guess you tackle a high peak or two, and all of a sudden anything that doesn’t leave your legs sore for days or you drenched, drenched in a pool of sweat, and views to neighboring states just seems so pedestrian (I kid…mostly).  I’m excited to announce that this past June I found a great Pennsylvania hike that lived up to my annoyingly pretensious standards, Jim Thorpe’s Glen Onoko falls.

Glen Onoko falls, named for a resort that once inhibited the space on the top, is a series of waterfalls located in a state gamelands, which empties into the Lehigh River in the southern end of the Lehigh Gorge State Park, just outside of Jim Thorpe. It’s a popular hike in the Lehigh Valley, and anytime I searched for “Hikes in PA” it always comes up, however there’s not much information out there about this hike; this is the site I used to get a feel for what was in store.

I ended up hiking Glen Onoko on a day off from work in June that I was supposed to spend running errands and spring cleaning my closet. Like most days when you’re looking to be productive, it ended up being gorgeous, and during a Facebook chat with my sister, who also was supposed to be being productive on a day off, we concluded that we should not be spending time indoors, and should embark on some sort of hike. I’d been eying Glen Onoko for a while, and Jim Thorpe was a perfect meeting spot for us. I’m based north of Scranton, she’s in center city Philadelphia, and I think the drive took each of us about an hour and a half.

I thought I arrived much earlier then my sister, so found somewhere to park downtown and walked around a bit. Jim Thorpe’s a cool little town in its own right, which I’ve written about before, and I grabbed some home-made ice cream, took a couple of pictures of the Old Jail, and was about to enter a used book store when my sister called me, acting very much an angry elf. We’d had a bit of communication issue-I assumed we’d meet downtown, and then ride together to the falls, which are just outside of town. She put “Glen Onoko falls” into her GPS, and was taken to a spot in the gamelands well above the falls. It turns out we did get there at the same time, but she had driven about 20 minutes out of her way. Whoops.  I guess the road she had driven also hung on the edge of the Lehigh Gorge, so I’m assuming she cried a couple time on this drive, because she is terrified of heights.

So there’s your pro-tip: do not try and GPS your way to Glen Onoko. In fact, even once we met up, and I apologized, and she stopped being pissed with me, and I got into her car, we had a bit of a trouble finding the place, so let me spell it out for you:

GPS your way to the Hotel Switzerland (5 Hazard Square, Jim Thorpe, PA 18229), which is smack in the middle of Jim Thorpe, right next to a couple of public parking lots, and where you’ll need to start in order to follow these directions.  From the Hotel Switzerland, follow Lehigh Avenue until you come to River Street, where you’ll cross a bridge across the Lehigh River Gorge. You’ll take the first left onto West Front Street, and follow that to Main Street. After about a half mile, just after the road becomes wooded, you’ll want to take your first left. When we were there, signs marked “Glen Onoko” and “Lehigh Gorge Trail,” but again, if there isn’t, it’s your first left. This road will lead down to a large parking area that stretches for over half a mile-feel free to drive almost till you can’t anymore, once you see the bridge that crosses the Lehigh River. An alternative, would be the park downtown and follow the Lehigh Gorge Trail all the way up until this point, but realize that’s going to add alot of walking to your trip, and while the Gorge trail is flat, Glen Onoko is a pretty strenuous hike.

Once you walk over the bridge, you’ll a staircase leading down off the Gorge Trail to the river. Walk down, and then follow the trail underneath the bridge you just crossed. At this point you’ll come to a trailhead with two different options, and a map. Both will lead to the falls, it just depends whether you want to walk directly to the top and back, or do more of a circuit. We chose the circuit, walking up the mountain, and then descending the fall’s trail, but it seemed like the opposite was more popular.  It was orange swatches we were following through the woods, however at the day we were there, these were hardly necessary as this is a popular hike. It was pretty packed when we went on a Thursday afternoon, so I would say to not expect peace and solitude. 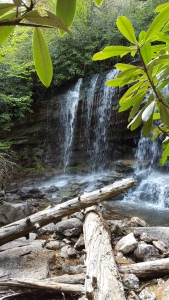 As mentioned, this is not a light hike, and we were sweating pretty good by the time we got to the top. There’s several options to continue further up here, but we chose not to do that, and there’s signs here clearly marking the way back down by the falls. Glen Onoko Falls is technically the middle of three falls that make their way to the Lehigh River, pretty much one after another. The very top fall is probably the least impressive, so walking down might have been the way to go, as each one was more impressive then the last.

This is probably a good place to mention that these are slippery waterfalls, with no barriers, and high drops, and unfortunately rescues and injuries are not uncommon. In fact, two weeks after we visited, two students from Lehigh College died falling off one of the ledges, and authorities estimate that at least eleven people have died here since the 70’s. I hope that’s not a detractor, as I’ll be completely honest, there was no point on the actual trail where I felt I was in danger. Use common sense. Wear shoes that have good grips, and that you’ve tested on wet conditions, and concentrate on where you’re going.  There were plenty of people venturing off the trail, and dangling their feet over the side of wet, sheer drops, and I don’t want to be the patronizing guy at the party, but it’s kind of like, well, c’mon now. Be smart.

In fact, for those of you dying for the perfect instagram, ditch the whole yoga-pose-on-the-edge-of-a-cliff idea YOU WERE NOT THE FIRST ONE TO HAVE, as there’s plenty of places on the bottom of the falls to walk underneath the water. We declined, as neither of us were wearing bathing suits, but did get close enough for the mist to cool us down, and to obviously get a good insta shot (if you were contemplating doing a yoga pose at the bottom, ditch that too. YOU LOOK LIKE AN ASS).  In total, the whole hike took us about 2 hours to complete, and both of us are fast walkers. I actually wish we brought along more food and water and were able to hang out near the bottom of the falls for a little while longer. 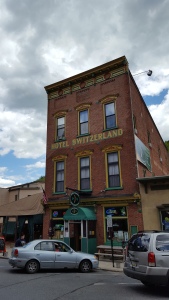 After the hike, we had a quick dinner at Molly Maguires, the restaurant located in the aforementioned Hotel Switzerland, which had a great deck to unwind on with some food. We skipped the adult beverages as both of us were driving home, but had that not been the case, I could see having a good time here. I’d also recommend stopping by the Red Castle Brewery a couple miles up the road in Lehighton.  I didn’t stop there on this trip, but spent a very pleasant afternoon there a couple of weeks later with my brother and cousin on the way home from a wedding in Lansdale.  We’d gotten off the highway to get some gas, and my cousin and I were dying due to the irresponsible way we took advantage of said wedding’s open bar the night prior, and made the executive decision that a little hair of the dog was in order.  Someone above was obviously watching out for us, as this brewery was just down the road from the gas station. We thought it’d just be maybe a flight and a drink, but it ended up kicking off a respectable little Sunday funday.  I enjoyed both their King’s of Mayhem and Queens Guard, but the brewery also served a couple decent lagers, and I was pleasantly surprised by the Eastern European influence of their menu.  Anywhere I could get a beer, kielbasa sandwich, and potato pancakes for under $15.00 is ok in my book.