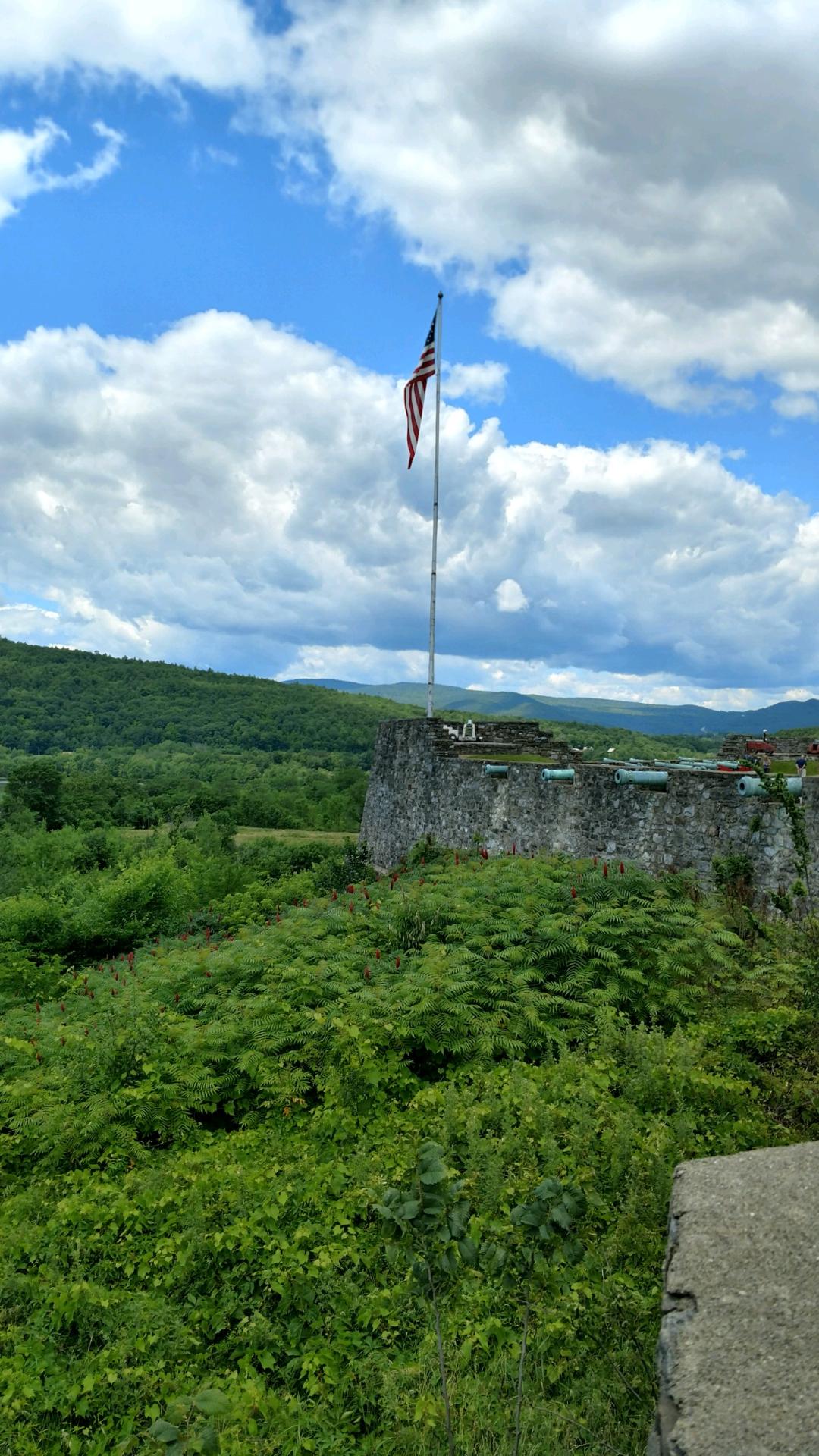 4th of July in the Adirondacks

I think I can safely say that summer in the Adirondacks is my favorite vacation destination.  My brother and both had a four day weekend for this July 4th, so decided to take advantage by heading up to Lake Placid once again to tackle another high peak.  Mt. Colden now officially marks my 4th high peak climbed. So just 42 more to go. Casual.

I actually had to go into work for a bit on Saturday, so our plans were to leave by 5AM Sunday in order to get up there early and have the entire day to mess around with.  Since I was going to be around Saturday night, I attended my uncle’s annual 4th of July bash, and decided to drink only Bud heavy, and Utica Club, because America and all, so suffice to say my 4:30 AM alarm was not a pleasurable experience.  Still, we made it out the door on time, and I thankfully slept solidly until just before arriving in Albany.

I love Lake Placid in the winter, and most of my trips up there are XC skiing based, but man if it isn’t straight up prettier during the summer, especially the ride up, where everything is green, and you don’t realize how much water is up there; all these lakes, rivers, and canals that are frozen, or snow covered are now visible. 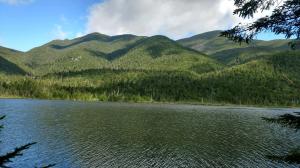 Speaking of water, I was somehow unaware up until just a few months ago when my brother told me, what a big canoeing and boating destination this is.  So our plans on Sunday were to do a kayak trip through the channels and lakes surrounding Saranac Lake. My brother initially wanted to canoe, but I never think they feel 100% stable, and was only imagining the kinds of fights we’d get into trying to synchronize our paddling, so kayaking it was. 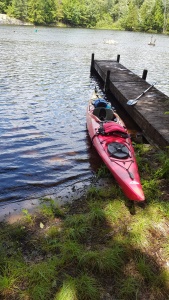 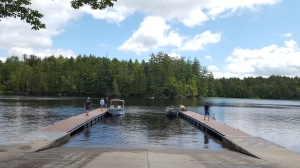 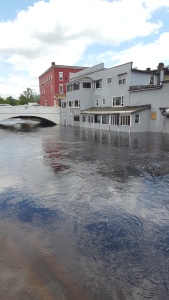 We did a trip through St. Regis Canoe Outfitters, which has a shop right in downtown Saranac Lake. We liked this one because they provide shuttle services, or in our case, we left our car at the shop, they drove us to a launch point, and we then paddled back.  We did Trip 3, as seen here, State Bridge to base, which meant that we started in the channel between Lower Saranac Lake and Oseetah Lake, would paddle across Oseetah Lake, into Lake of the Flowers, and then to the base in Saranac Village. Saranac Village is not located on Saranac Lake, much as the town of Lake Placid mostly surrounds Mirror Lake, and the titular lake is on the outskirts. It’s all very confusing. 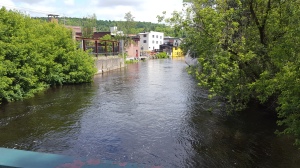 I’m not a stranger to kayaking, so the initial row through the channel was nice, and what I was used to. The Adirondacks had been slammed by massive rain storms, so we were warned that the water was very high in places, although in the channel, which was surrounded by undeveloped state lands, you couldn’t really tell. In order to get from the channel, into Lake Oseetah, you did have to use a lock, which was a first for me. I didn’t love it to tell you the truth. You paddle into what essentially feels like a concrete box full of very brackish water, and just float while the water drains around you.  Once you’ve gone down sufficiently, two giant doors swing open and you feel like you need to rush out, because there’s a line of boats waiting on the other end. I also felt like someone should’ve announced “Welcome To Jurassic Park” when the lock doors opened.

I hate to be a debbie downer, but I did not love paddling the kayak over the open lake. These lakes are wide, and it was incredibly windy, so any expanse of open water felt quite harrowing. There’s also a lot of boat traffic on these lakes, which I wasn’t expecting, so a lot of wake to deal with. I felt in danger of tipping a good 60% of the time, and  over the course of 31 years, my brother’s irrational fear of sharks in fresh water has partially been transferred to me through osmosis, I think, so I’m not a fan of being thrown in murky, deep water.  It was also a bit disconcerting to see how many of the docks were underwater due to the incredible amount of rain. Why? I’m not sure, but it was.

These lakes are very cool in the fact that they are dotted with tons of small islands, most of which house cottages and boat houses, so there was always something to look at. I do wonder what happens though if you have a cottage island, and you say, drive five hours from New Jersey, only to find that the weather is too rough to get to it. I’m sure there’s any easy answer to this just outside my realm of knowledge. 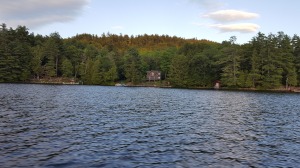 We were both dead after paddling all afternoon, and since I’ve yet to learn how to properly apply sunscreen, I was rocking what was starting to slowly become a slightly painful Irish tan.  We were on our way to check into our campsite, we were planning on a low key night, since we wanted to be on the trail the following day by 6, when I checked Instagram and realized our cousins were up at their Adirondack cottage. They’ve had a cottage on Lincoln Pond, which is about 25 minutes from Lake Placid, for years, and we always talk on Thanksgiving and family functions, about how we should try and coordinate and be up there on the same weekends. We alerted them to our presence in the ADK’s and were promptly invited over for ribs. Low key night out the window. 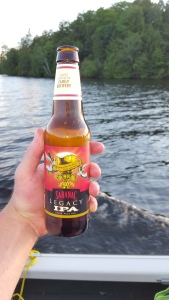 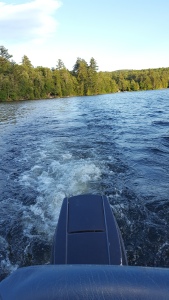 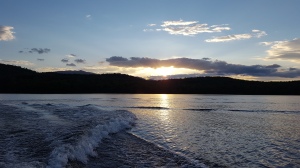 Shawn and I had been up to Lincoln Pond as small children, and our memory was that we were on these crazy back roads forever to get there. It’s funny how memory works, because the pond (which really is 100% a lake) is within earshot of 87. Their cabin is a on a crazy dirt road though, so they had us park by the lake’s bridge, and picked us up via boat.  We had a great time eating ribs and hanging out on the dock. The views of the High Peaks from their cabin are stunning, and did a sunset cruise around the lake on the boat, and a night time lake trip back to our car. We managed to be in bed at a decent hour, but it was such a nice, and unexpected addition to our trip.

Mt. Colden is the 12th highest of the high peaks, and we had decided to summit it via the Avalanche Pass loop, a 14.2 mile hike.  I used the following blog to help map our route, and figure out the timing of everything. We were on the trail by 6, as planned, and set out in high spirits as we could tell it was going to be a great day to be out on the trail.

The trail to avalanche pass, is mostly harmless, and incredibly scenic (I’d never been to Marcy Dam before, but check out the amazing views it provides). One of the highlights was when we got to Avalanche Lake. The trail circumnavigating the lake is more or less a scramble/maze hybrid with all these wooden ladders, and gangplanks to navigate. It took us an entire hour to do. The other cool thing about this portion of the hike is that from the time we broke off on the Avalanche Pass trail, till we reached the trail at the base of Mt. Colden. We were truly alone in the Adirondack wilderness, no one to ruin pictures, but also no one around to hear you scream.  We both agreed that had it been a more overcast day, we might’ve been creeped out a bit. There was something sinister about Avalanche Lake. Shawn was certain that if water spirits existed, that’s where they resided. 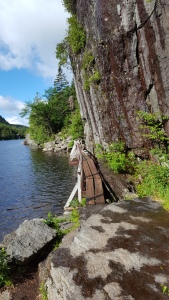 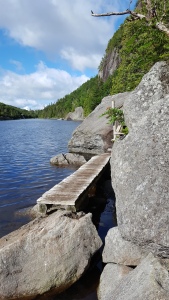 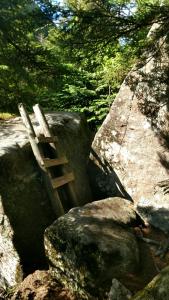 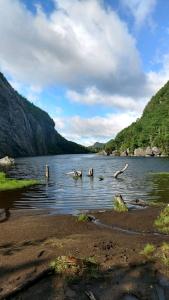 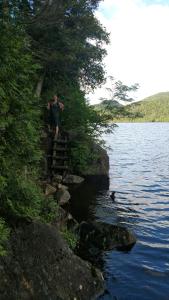 There’s not a ton to really tell about the way up Mt. Colden, aside from letting you know that it’s terribly steep, and you’re pretty much on all fours for a solid portion of it.  There’s a somewhat scary part, just before the summit, but the actual summit is breaktaking, and probably my favorite of the four we’ve done so far. The trail we took back down was much milder, and thus more popular, as we started to run into some, but never many, hikers.  This one took a lot out of me, and I was essentially a walking corpse the last mile, with people passing me out, and undoubtedly feeling sorry for me, the entire time. I finally passed another couple out, who was it rougher shape than I, and so found new life the last half mile. 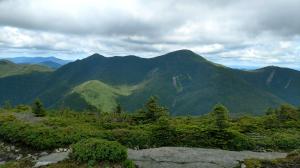 We were both in bed that night by like, 8:30. We stayed at Draper’s Acres campground, which I’ve talked about before. This time, we rented one of their cabins, which alotted us a small kichen (that we did not use), a shower (with awesome pressure and hot water capacity), two beds, and a small front porch, all for $75.00 a night. I cannot recommend this place enough if you want to head up to Lake Placid in the summer, but don’t want to break the bank. Plus, it’s super close to the Adirondack Loj, which is where so many of the hikes begin. 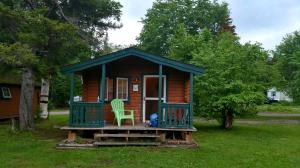 We were up fairly early Tuesday due to our early bedtimes, so headed out and had breakfast outside at the ADK Cafe in Keene.  I also have to give a special mention to the Cedar Run Bakery just across the river. They have amazing baked goods, and I think it’s safe to say that the maple walnut pie I purchased is going to make this a staple on future trips.

We’d briefly considered stopping at Lake George to paddleboard on the way back, but nixed that due to our bodies basically falling apart. We did stop at Fort Ticonderago, which we felt was apt for the 4th of July. We were not the only ones who had this idea, and sat in a dirt road traffic jam for a solid 20 minutes waiting to get in. Was it cool to see? Yes. Was it worth the 20 minutes sitting in a dirt road traffic jam? Probably not. Plus, there were way too many reenactors walking around in Colonial garb and speaking in bad British accents than I was comfortable with, but we always see signs for this when we’re up here, so I’m glad we went.

We did drive down the shore of Lake George on our ride home, and it’s a beautiful lake. There are 100% no water spirits there. I kind of want to vacation there for a weekend next summer. We stopped in Bolton Landing for a quick lunch of crab rolls, some ice cream, and then headed back home, another successful foray into the Adirondacks in the book.

1 comments on “4th of July in the Adirondacks”