So my brother and I have officially decided that this summer we are going to tackle the New Hampshire’s Presidential Traverse. The Presidential Traverse is a pretty daunting (humblebrag alert) 23 mile hike in New Hampshire’s White Mountains that summits 8 peaks over 4,000 feet, and gets its name because all eight peaks, Madison, Adams, Jefferson, Washington, Monroe, Eisenhower, and Pierce are, you guessed it, named after presidents.

Like Jessie Spano before me, I’m both excited…and scared. More excited though. My brother and I have really been making the rounds with solid hikes over the past few years, and this will be the loftiest one we attempt.  I like that it’ll give me something to work towards over this summer, that I’ll have these bragging rights, but am mostly excited to return to the White Mountains and spend a day out on its peaks and ridges. We went up two years ago to do another infamous New Hampshire Hike, the Franconia Ridge Traverse, which was absolutely the most breathtaking hike I’ve taken visually.  The Franconia Ridge Traverse is an iconic New England, and East Coast hike, and unlike it’s Presidential counterpart, it doesn’t require training, leaving a car on one end, or even super athletic prowess (but like, some athletic prowess for sure), and my announcing that I’ll be doing the Presidential Traverse is a perfect opportunity to share with you the photographs and story of a hike I think anyone who even semi-likes hiking should take.

Over Columbus Day 2016, my brother and I decided to tackle the Franconia Ridge Loop, the most popular way to tackle this particular mountain range. Located in Franconia Notch State Park, the loop tackles nine miles, three peaks (Lafayette, Lincoln, and Little Haystack), and takes approximately 7 hours.  What makes this hike so unique, and particularly picturesque, is that approximately a mile of this hike is spent “ridgewalking,” essentially following a trail that leads the way on the spines of the mountain between these three peaks, and is located in a certified Alpine zone. There’s little foliage up that far, so the views are unfettered and vast; google image this hike and you’ll see exactly why we were so excited.

This hike is well, a bit of a hike; our car ride clocked in at about 8 hours, but part of that was because we were traveling late on a rainy Friday night, and I also may have managed to get myself pulled over by a very polite NH state trooper.  It’s worth it though, and there’s actually plenty in the area you could combine this with to really make a nice roadtrip. Portland is about 1.5 hours away, as is Burlington, Vermont. We did a NH, Stowe, Montreal weekend, which was a blast (and which I’m just realizing I’ve never written about. I truly am awful at this). There’s also plenty of other gorgeous hikes to take in the White Mountains.

Because it’s such an iconic hike, Franconia Ridge gets crowded. More then a few articles I read stated that it’s not unusual for it to see over 700 hikers a day, so I’d definitely get there early if you want the mountains to be a bit more isolated, and want a parking spot (or go on a weekday if you could swing that).  We parked at the Lafayette Place Campground parking lot, which is right off I-93, and where the trailhead begins. I think we got there around 7AM, and the parking lot was already half full. Another thing to keep in mind when hiking in the White Mountains is that the weather changes suddenly. I read this fact in almost all my pre-hike reading, but was pretty dismissive of it.  I wish I could say I was young and stupid at the time, but it was  less then 2 years ago at this point, and essentially I was the same person I am today.  I think it’s just because people in general tend to act like morons on vacation, so a lot of hiking websites have to say things like “wear sneakers” or “bring a sweatshirt,”  or “prepare for weather changes” just because if not people won’t? I don’t know. I’m trying to justify here. Anyway, I figured if I brought a change of clothes and socks, as well as the usual rain-gear I’d be solid. Actually, when we woke up, while there was frost on the ground and it was much colder then a typical October morning in Pennsylvania, the local forecast said it was supposed to get up to 75. I wore shorts under my sweat pants, and a sleeveless UnderArmour running shirt under my sweatshirt. I decided I didn’t need my Northface, and took out the winter hat and extra pair of gloves I’d initially packed.  I fully expected, like the idiot I am, to be strolling along a sunny ridge, suns-out-guns-out style.

My big mistake was checking the weather in the region. It was in fact 75 and sunny that day, down at regular elevation.  The weather on the top of the mountain? That’s a different beast altogether.  Your best bet is to check the website for the Mount Washington Observatory, as that will give you the summit conditions.  I can’t stress enough what an amateur move only checking the local weather was.

This is a loop hike that starts and stops in the same place, so you have two real options, the Old Brindle Path, and the Falling Waters Trail. We opted to walk up the Falling Waters Trail, and I wish I could give you the rationale, but I don’t remember it. That being said, I’d do it this way again, and here’s why: the Falling Waters Trail does, as the name suggests, pass a series of waterfalls. It was nice to be passing these while we were still fresh, so we could stop, take pictures, and generally enjoy them. We were so exhausted on the way down, that I think we would’ve just bypassed a few of these completely.  It’s also pretty steep, and again, I’d rather conquer that when my energy is piqued.

As we got out of the falling water section, and moved into the forested top of the mountain, something interesting started happening. The ground started acquiring frost, and then snow started sticking, and then as we got higher, we heard very strong wind. I was nervous now, as it sounded like a full on blizzard was happening somewhere around us, but we didn’t drive 8 hours and get that damn ticket to just turn back, so ill-equipped as we were, we continued on.  I imagine how beautiful the moment would’ve been when you emerge past the treeline to see glorious Vermont and New Hampshire countryside spread out below you in it’s fall foliaged glory, and beautiful alpine vegetation dappled in the sunlight.  We saw hikers being buffetted by howling winds, flurries going sideways, and snow clinging to the vegetation.  We braced ourselves, walked to the first summit, and looked down upon the ridgetrail we’d be taking.  It’s only a mile, but in this weather, it looked long, and truth be told, it probably would’ve looked scary had there not been so many other hikers. You know what else? We certainly could still see the New Hampshire and Vermont countryside below us, sunny and 75. It really was an awesome site to behold. It was also brutally cold.

I would’ve loved to have spent time idling along this trail, but we moved fast. We had too, especially me, the moron with no gloves  and only a small Northface headband, sweatshirt, and sweats. My brother at least had a shell jacket.  I’m not going to lie, while looking back, it was an awesome experience, it was not fun in the moment, and the wind was so strong that at one point, at a particularly open sect of trail, we actually had to lay down for a couple minutes until we felt safe. We hardly registered the middle peak, but did stop and take some pictures on the third one, which was pretty packed with other hikers, like us, clearly not expecting an early October blizzard (there were quite a few people in shorts).  It was at this point we also took the wrong trail for about a half a mile, elongating what had already become too long a hike. 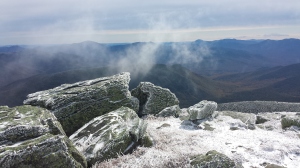 The storm really only got the very top of the mountain, because as we made our way down, it cleared up pretty fast, and by the time we reached the Mountain Hut on the Old Bridle path, where we stopped for lunch, I’d shed my top layers, and was sweating properly.  This is another place that would’ve been cool to hang out for a while. It was packed with hikers, and had a porch right by a picturesque lake (pond? I don’t know), but by this time, the natural beauty around has had become secondary to getting out of my sneakers and into flip flops.

We ended up conquering the 9 mile trek, along with our probably 1 mile detour in about 6 hours. This is strenuous, but absolutely doable for anyone who considers themselves in decent shape, and we saw people of all types on the trail. Like, I said, we went to Stowe afterwards, and while I was exhausted during the drive, it was a beautiful one. For those looking to crash somewhere closer, the town of Lincoln is just a stone’s throw away, and the Woodstock Inn has a brewery to help you unwind.