A Day on the Finger Lakes Beer Trail 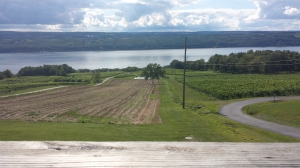 The Finger Lakes is primarily known around these parts as a destination for wine connoisseurs, bachelorette parties, and someplace your parents and their friends take a limo to for the afternoon and come back with an embarrassing buzz. I’d always heard good things, but never had a strong pull to go because, well, wine’s just really not my thing.

However, the craft beer movement has slowly seeped its way into the wine world, and the finger lakes is now known as somewhere you could go to sample wine, beer, cider, and spirits. When my parents decided that we’re still not too old for a family vacation and asked for ideas of where to go, I thought this would be perfect. It’s an easy drive, and sampling a bunch of beer and wine on their tab sounded like an appealing weekend.

Since both my sister and I had to work on Friday, we planned to go up Saturday morning and stay till Monday. We figured we’d get a good nights rest Friday and be ready to leave early. The wrench in plan came when one of our favorite cousins let us know he’d be in town Friday night. Work schedules were rearranged to accommodate seeing him and many pitchers of Yuengling were drank. My dad insisted that our 8am start time still stood, so suffice to say it wasn’t a pleasant start. 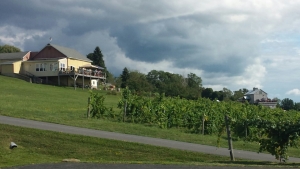 I crafted the itinerary for Saturday. We decided to stay in Ithaca (a town worthy of a destination trip all its own) and spend our first day on Seneca Lake, due to the amount of breweries there. Our first stop was Wagner Valley Vineyard and brewery.

Ten years ago if you went tasting in the Finger Lakes, you would’ve only encountered wine. Now, many places, especially the larger vineyards incorporate breweries on the premises (or simply have beer for sale). Wagner Valley was one of the first to do so.

I’ll be honest, I wasn’t blown away by any of the beer here (I keep coming back to the same point of over saturation of microbreweries requiring beer that stands out), but I would 100% come back. The brewery and winery at this facility are housed in two separate buildings, joined by a giant deck. There’s a great view of the lake, and picnic tables set up on the lawn as well. We saw a couple of families here with coolers and picnic baskets, which would be a great idea, however they are one of the few venues with a café on the premise. 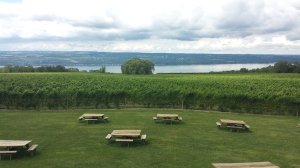 Tip: pack your own snacks if you’re doing a day on the Finger Lakes, food stops are few and far between.

Stop number two was the Hazlitt Vineyards, home of Red Cat Wine, and must stop locale if you are, or ever did consider yourself to be a basic bitch. Joking aside, Hazilitt was one of the wineries I was already familiar with, as it seems that every NEPA bachelorette party stops there, and instagrams it.

You could see why too, Hazlitt is one of the more popular vineyards (it was the only place we had to wait in line) and has wholly embraced this party-like atmosphere. While my mother, brother, and sister went to do a wine tasting, my dad and I snuck off to their outdoor bar, which sells wine, wine slushies, small snacks, and good old American non craft beer, all accompanied by an 80’s hits heavy DJ, and sauced middle aged women attempting to twerk. If I came back with friends, I’d 100% start or end here.

We may have been overzealous in our consumption of said good old American (and apparently Canadian…let’s just go with “continental”) non craft beer, and the ladies 100% went over zealous in their wine purchase and consumption (we ended up with our first crate of wine), so we decided food was on the menu. In came Big Johnson’s to the rescue. 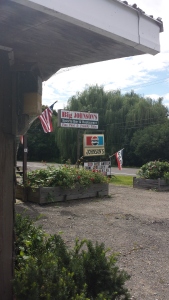 We ended up eating lunch at a biker bar during our jaunt through the Vineyards. Big Johnson’s is a sports/biker bar situated smack dab in the center of the wine trail, and while the food is standard bar fare (I think we all got either a hamburger or a hot dog), it’s a nice departure for those who crave a more bar centric experience.

We had two more breweries we wanted to visit, but some time to kill, so used this part of our day to go off itinerary a bit and stop at some wineries that caught our eye. The first, Rasta Ranch Vineyards, was a dud. As we should’ve been clued in by the name, this was essentially a hippie winery situated in an old barn (which is initially what caught our eye). Most people were in tie die and the place reeked of weed. We walked in, and walked back out (Jim Brothwell loathes hippies). 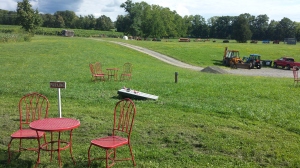 Our second stop was much more successful. Ryan William Vineyard is an extremely small vineyard, that I think operates more as a bed and breakfast. The tasting room was actually situated in their (extremely nice) garage, and my family really enjoyed the wine. I enjoyed the fact that I was able to purchase a can of Genesee (I figured we were upstate, why not) for $4.00 (they had a small selection of local craft beer as well). I also really liked that they had an outside set up with tables and bean bags on their farm. I could’ve stayed and played but Jimmy Brothwell wanted to go elsewhere, as he deemed this “too expensive” (he’s fun to travel with, I swear).

Chateau Lafayette Reneau, was our third off the cuff stop, which 100% had to do with it’s glorious view. We didn’t do a tasting here, but bought two bottles (wine for my sister and parents, a bottle of cider for Shawn and I) and enjoyed sitting on the deck-I think that’s what I liked most about the Finger Lakes, that you’re basically just hopping from deck to porch to yard to deck, all whilst day drinking.

Two Goats Brewery was somewhere we’d planned to stop, and someplace I would’ve 100% stayed longer. It’s situated in another old barn, again with an outstanding view of the Finger Lakes, and a nice deck. I think because there are still a lot less breweries then wineries, there was a large and pretty rowdy crowd here-it seemed like it would get fun as the evening went on, and is one of the few places on the trail that doesn’t close by 7 (I think they were open till 12 and usually get bands). I also appreciated that they had other beer on tap other then their own (I think it’s ballsy and cool when breweries do this), and knew I’d like them when I initially visited their website and found out that the only thing on their menu is roast beef sandwiches. That’s it. I respect that, and I got one, which was delicious and exactly what I needed at the time. 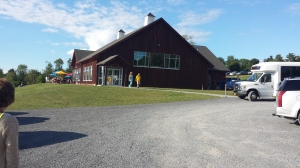 Grist Iron Brewery was our last official “beer trail” stop and probably my favorite view of the trip. It’s Seneca Lake’s newest brewery and situated on the “other” side of the road from the lake, which a higher vantage point. I was impressed by how big the brewery and it’s ground were (you could actually stay there), and we had a couple of beers on their patio, overlooking a small pond, old barn, and the lake in the distance. This also seems like it might be somewhere fun to park yourself for a while. 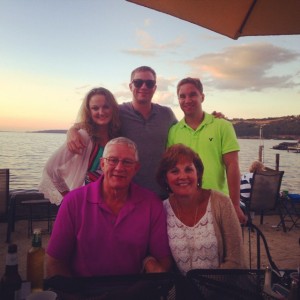 Our last stop of the day was dinner in the town of Watkins Glen. There’s actually a few more breweries located right there for those with more staying power then us (or, more rightfully, then my parents). We ate at the Seneca Harbor Station, on a lakeside patio. The food was alright, exactly what you’d expect from somewhere right on the water, but the view, especially at sunset, was great. If you’re up in the Finger Lakes and want to dine somewhere waterside, I don’t think you could beat this spot (and you 100% can’t find anything like it over in Ithaca). 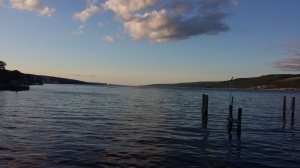 4 comments on “A Day on the Finger Lakes Beer Trail”