Run For Your Life and Other PA Zombie Runs 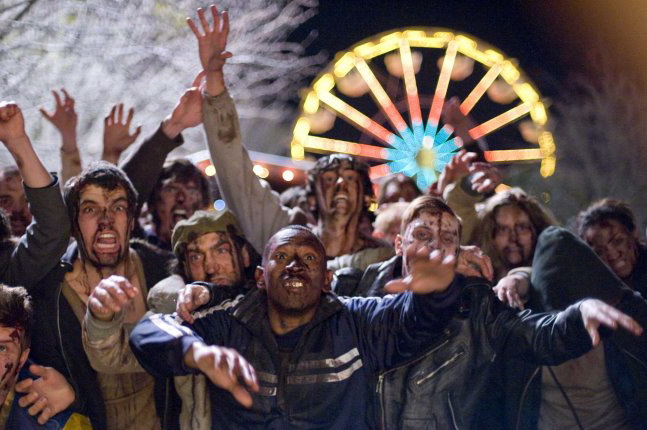 As far as races go, the trend thats been dominating the past couple of years is mud-runs.  It seems that every few weeks somebody I know on Facebook pops up with pictures from a Spartan Race or Tough Mudder.  Even my mother has been in one.   My buddy and I just signed up for a Tough Mudder in New Jersey for this mid-October.  I want to check out the hype, and shed the gut Ireland gave me.  I’ve also signed up for what seems to be the trendy race of this year: the Zombie Race.

We’re set to do the Run For You Life zombie mud run over Halloween weekend in Baltimore.  The premise seems simple. Before the race, you’re outfitted with a flag football belt.  People dressed as zombies attempt to steal flags as you run a 5k race complete with obstacles.   If all your flags are taken, you die.  Simple.  What I really like about the Run For Your Life race, is that there are multiple courses you can take, so if you don’t choose wisely, you’re 5k might become a 10k.  Skipping an obstacle will also render you a “zombie.”  At the conclusion of the race there’s a party with music and beer.  I’m sure we’ll stick around a bit before heading back to Baltimore for some costumed fun.

I did a little research and found that there are several zombie races here in PA.  Run For Your Life has a Pittsburgh event set up for September 1.  Reading PA has it’s own Zombie Mud Race that seems much more thematic than the one I’m participating in.  The obstacles include chainsaw wielding zombies, a corn maze, condemned building, and a “graveyard” where participants have to jump in and out of empty graves.

I was also thrilled to find that NEPA has it’s very own zombie race coming up this fall: Infectscranton.   Infect Scranton is not just a zombie mud run but an entire weekend, with haunted “zombie” tours of Scranton Friday night, a zombie pub crawl, student film festival, speakers, anda  panel with some cast members from AMC’s “Walking Dead.”  The Scranton course also has obstacles and you can win prizes for either finishing in the best time in your heat, or being a zombie that collects the most lives.

I found the following website, Mud Adventures, really helpful when doing some research for this post.  It helps you find themed races broken up by state.