Clothing Optional….Proceed at Your Own Risk

When I was in 7th grade my parents took us to Martha’s Vineyard for summer vacation.  I’d post pictures, but I was going through a really unfortunate Sun-In stage at the time.  Martha’s Vineyard is legit.  If you haven’t ever been, plan on doing so.  It’s got the classiness of Cape Cod, with some of the most picturesque beach scenery you’ll ever see, and it’s the location where they fimed Jaws (I’m a big Jaws fan, I have no idea why, but I enjoyed finding places from the movie I recognized.  I should do a post on it this summer.  For those of you who didn’t pay attention in geography, Martha’s Vineyard is an island off the coast of Cape Cod.  You have to take a ferry over which adds to the excitement of being cut off from the rest of the country.

The town of Aquinnah has arguably the most famous and picturesque beaches on the island.  A large clay cliff face known as Gay’s Head juts out into the ocean and creates the sort of beach you only see in the movies.  Moshup Beach is the beach directly below the cliffs so headed there one afternoon.  I took a picture of the sign because I thought it was funny that there was a shark sighting.  We should have read it alittle closer.  See if you could see what I mean.

The cliffs are a bit of a walk from the beach entrance so we settled a ways from them near a place that had some rocks in the ocean.  My brother sister and I were having a good time boogey boarding when my parents announced they were taking a walk to the cliffs.  We finished up, returned to the blanket, and almost immediately after my parents returend. My dad did not look pleased.  We asked why they’d come back so quick, and they told us to  go check out the cliffs ourselves. 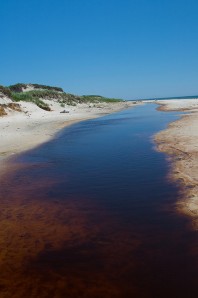 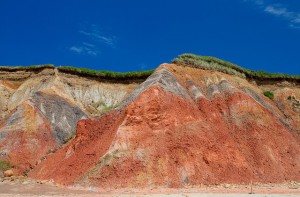 Right before the cliffs started to form, the crowds started to wan.  It must be because, while picturesque, the swimming here would be no good because of the rocks I rationalized.  That wasn’t the reason.  Just when the scenery started to become really dramatic, a small crowd popped up.  There wasn’t a ton of people: one group frolicked in the water, while the rest where on blankets situated over a span of about 100 feet.  We got close and realized why my father looked peturbed and the other crowds stayed away.  We were the only people with our bathing suits on.

We all realized it about the same time, acknowleding what was happening with exchanged smirks, and continuing on with our views firmly in front of us.  We had almost made it through to the cliffs when a very fat man, pushed himself up off the beach directly in our path and started stretching for everyone to see.  Displaying our maturity, we screamed and ran back at full speed.

What we hadn’t been told was that the nude portion of Moshup beach is common knowledge to natives of the island.  In fact, Martha’s Vineyard, despite it’s reputation as summer retreat for wealthy New England Wasp-types and Presidents, has a long history of public nudity at it’s beaches.  Lucy Vincent beach in neighboring Chilmark allegedely doesn’t advertise its nudity the way Moshup does, but it doesn’t frown on it either.

The crowd at the nude beach was, interesting to put it nicely.  Being a thirteen year old boy, I clearly reinvented a reason to wander back.  I believe I “dropped my chapstick in the sand.”  I’m not proud.  On my galavant back I was dissapointed to find out that most of the nude sanbathers were over fifty, short, fat, and disturbilng tan all over.  There were also several fully nude families that were more than a bit uncomfortable.  I didn’t stay long, but if I’m ever to return I’ll take the advise of one of the tripadvisor posts I read, “make sure you’re wearing dark sunglasses….you’ll find yourself compelled to stare no matter how horrific the sights are.”

I’m sharing this story because it recently came to my attention that the largest and most well known nude beach in the United States is not in Texas, or Florida, or California as I would have guessed, but rather very near home in Northern New Jersey.  In fact, Gunnison beach reportedly has “magnificent views of Manhattan and the Verazzano Bridge.  Last place I’d think a nude beach would be plopped.

Now I’m not Naturalist by any means, and consider to myself to be pretty modest.  The closest I’ve ever come to public nudity was an ill advised beer-pong bed that lead to a run around a very desolate rented ski house with a hat covering the goods.  There is however, something about a nude beach that’s vaguely appealing.  It could be the mystery, the taboo, it could be amusement, or it could just be one of those “to say I did it” moments.  There’s more in the northeast then you’d think, so if you ever feel the need to drop trou within a day’s drive of PA, here’s where you could do so without being arrested.  Proceed at your own risk.

Gunnison Beach– The largest and most prominent nude beach in the country.  It’s named after Fort Gunnison, which used to guard New York’s harbor and whose remains can still be seen if you’re more into history than nudity.  The beach has a watchdog group who looks out for “gawkers.”  Here’s an interesting article the New York Times did in 2008 about the beach.

Sunset Beach (Cape May): I found Sunset Beach in Cape May listed on several websites as a nude beach, but no where on their official website did I find mention.  Furthermore, on various travel review sites, Sunset Beach is applauded for its daily flag lowering ceremony at sunset.  I’d tread cautiously here.

Truro (located on Cape Cod): Much like Sunset Beach, this is listed as a nude beach, but I can’t find anything official.  The town does have an interesting/sinister history as serial killer Tony Costa in killed and dismembered 8 women here in 1969.  Just a sunny beach fact for you.

Yes, Vermont is land locked, but Vermont has the highest amount of nude beaches in the northeast.   While Vermont law prohibits disrobing in bpublic, it doesn’t outlaw public nudity.  Nudity is allowed anywhere it hasn’t been specifically denied.

The Ledges, Wilmington Vermont: Located on the Harriman Resevoir outside town.

Knight Island: Again located in Lake Champlain.  This island is located about two miles offshore and requires either a personal craft or use of a water taxi to get to.  It’s owned by the Vermont State Park Service and has camping available.  Nudity isn’t as much allowed as it’s so removed from everything no on really cares.

South Beach, Lake Willoughby: Located in the town of Westmore Vermont, South Beach is a popular nude sunbathing spot, although you’ll find just as many dressed swimmers.  The town made national news a few years ago over whether to ban public nudity.  Be aware: this is a glacial lake, so the water is freezing.

The Punchbowl:  I’m going to let wikipedia take care of this because I find it so hilarious.

The Punchbowl on the Mad River between the intersection of VT Rt17 and Warren, VT is a privately owned nude swimming hole, open to anyone. It’s on the west side of Route 100, and you need to walk thru a short field before encountering signs explaining that there is public nudity, and explaining the guidelines for swimming there. It’s mostly just common courtesy, and there is usually a wide array of swimmers, from single men and women to entire families. There are a couple small waterfalls, a couple deep pools, and a small slide to slide down during moderate to high water periods. The water is cool, crystal clear and very refreshing. Swimmers should plan to swim nude, since visitors that swim there in a bathing suit tend to be looked at with some suspicion that they are only there to ‘observe’ the other nude swimmers.

I love that people in bathing suits are viewed with suspicion.  Great stuff.

9 comments on “Clothing Optional….Proceed at Your Own Risk”