A Visit to the Mohonk Mountain House

This is going to end up being one of those posts where I write a little, and mainly express my thoughts through photographs, because my words will never be able to properly capture how gorgeous these pictures are.

I’ll try, sure. I’ll fail thought. Just throwing that out there.

The Mohonk Mountain House, which I’ve been wanting to cross-country ski at since discovering its existence last year, is the nicest hotel I’ve ever been at, where I wasn’t allowed inside.

Allow me to elaborate.

After a Saturday spent cross-country skiing for my birthday weekend up near Hunter Mountain, my brother and I decided to celebrate our actual birthday on Sunday with more skiing on the grounds of the Mohonk Mountain House.

Mohonk Mountain House is a historic resort located on the Shawangunk Ridge (this is also the location of Minnewaska State Park Preserve) just outside New Paltz, New York, in Ulster County. Like Villa Vosilla from last week’s post, it’s a throwback to the type of destination resort that upstate New York used to be known for. Except while Villa Vosilla is the type of place you and I would maybe go to spend time with our family, Mohonk Mountain House has a history of hosting Presidents and robber Barons in its heyday. Heyday might be premature too, as from what I witnessed on my visit, it’s still very much thriving,  It still attracts a decidedly bougier crowd.  That’s probably a little unfair. Nights start at around $450.00, but that does include three meals, so the cost kind of evens out. It also could include add-ons for high tea, and has a dress code, and the hotel also doesn’t allow the peasants like you and me access to its hallowed halls if you are simply there on a hiking pass, and not an overnight guest, which is what we did. So, maybe bougie does hold up. I’m not holding it against them though.

Mohonk Mountain House is connected to the nearby Mohonk Preserve and Minnewaska State Park through a series of over 85 miles of trails and carriage roads, but anyone can access the grounds by paying a 35 dollar fee to either xc ski or snowshoe in the winter, or hike in the summer. They do offer both snowshoe and cross-country ski rentals for an additional fee in their ski ship. 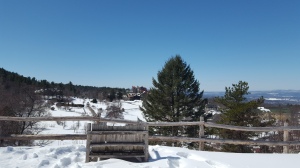 The bulk of our ski was Sky Top Drive, ostensibly the jewel of the ski trails on the Mohonk grounds,  due to outstanding views of the Catskill Park, Minnewaska, and the Hudson Valley the ski up entailed. This takes you to the top of a relatively small peak overlooking the hotel, which has a feudal looking  viewing tower on top, which I mistakenly assumed would be closed, but was happy to find was still open  to visitors even in the winter.  While this was absolutely what I’d describe as a vigorous ski, Shawn and I both move at pretty rapid pace, so I don’t think it’d be that bad for someone less experienced. Most of the people we passed were actually snowshoeing, and this would be the perfect place to check that out.

If you’re looking for somewhere to try out xc skis or snowshoes, I’d  recommend the Mohonk Mountain house, just because of the insane views and how meticulously maintained and picturesque everything is.  I’d really like to come back in the spring and summer and try out their Lemon Squeezer & Labyrinth Hike, as detailed here by HiketheHudsonValley.  I don’t know that I could justify spending a night at the Mohonk Mountain House anytime in the near future, but it’s definitely becoming a bucketlist item for the future, and nearby New Paltz has places to stay if you’re looking to make it a weekend trip. Kingston is about 20 miles away as well, and from what I read has a really great food/bar scene.  As mentioned earlier, we combined this with our trip to Hunter Mountain, which is just over an hour away. I was super exhausted from two solid days of skiing, and had things I wanted to do at home Sunday night, so didn’t stick around much after our ski ended. However, if you’re the type who likes to reward yourself with a post ski beverage (which typically, I do), New Paltz Brewing, Arrowood Farms, and Rough Cut all lie west of the ridge, while Yard Owl lies on the Hudson Valley side.

5 comments on “A Visit to the Mohonk Mountain House”