A Day On the Susquehanna Ale Trail With Plenty of Detours

Do you want to know what I love most about beer tasting? It’s a classy excuse to start drinking around noon. Budlight-Lime outside a sports bar at 11 Am? Borderline trash (not saying I haven’t been there); people assume that maybe you have a problem. A nice amber ale or chocolate  infused porter? You’re simply a lover of good beer with a complex and curious palate. Since I’m basically white trash at heart (thanks, NEPA) I consistently find myself looking for classy facades to hide my natural inclinations, which is precisely why I got so excited when I first found out about the Susquehanna Ale Trail passport event which had its third iteration over the past two weekends in south-central Pennsylvania.

The passport event occurs over two weekends, providing the attendee ample time to visit all the breweries on the list (it’s 55 miles between Hanover and Intercourse). It costs fifteen dollars and can be purchased at any participating brewery. The passport includes samples at each, along with a sovereign mug (so basically, I bought this solely for the mug), which honestly is a phenomenal deal. We only made it to three of the locales, and I feel like we more than got our money’s worth.

I woke up Saturday knowing we wanted to explore the Susquehanna Ale trail, as many of these breweries I’d never been to, but that we were going to be playing fast and loose with the itinerary, as Lancaster and York are chock full of a lot of great breweries, not all of whom were participating. Case in point: Springhouse Taproom in Lancaster.

I’ve written about Springhouse before. I really like it as a bar, it’s only three blocks from my apartment and they make two of my favorite beers: a chocolate peanut butter stout and my favorite pumpkin ale. Also, The Ale Trail event didn’t technically start until noon and my friend had arrived from Philly at 11:15 so we needed something to kill that 45 minutes. Springhouse is great on a Saturday morning as it’s located right across the alley from Lancaster’s Central Market, which provides a bustling atmosphere and great people watching. One beer down and we headed to York to  get on the proverbial trail.

Mudhook Brewing Company actually had one big similarity to Springhouse in that it is located in close proximity to York’s Central Market, but instead of being across the alley, it actually is part of the market complex (which I’m sure is very detrimental to a sect of people who had every good intention of just going out to grab some fresh produce real quick). We were seated outside because of the nice weather and got a flight and I had some wings for lunch.

Liquid Hero Brewing Company was our second stop and probably the nicest surprise of the trip. It’s located in a refurbished rail warehouse in York, very close to Satandar Stadium and from the outside is certainly nothing special (especially compared to how inviting Mudhook was) however out of all the (new) places we visited, this is probably the one I’d go back to first. It has a very laid back, hangout type atmosphere and the perfect type of small. They were also playing Dropkick Murphys, which didn’t hurt.

We got three free samples and then ended up ordering a schweet and stout (strawberry stout and vanilla stout) that was absolutely delicious and when we were halfway through, one of the owners came out to announce that he’d give a quick tour to anyone with an Ale Trail passport who was interested, which is what really made me like this place a lot.

Liquid Hero is indeed a very small brewery. The small bar area and where the brewing takes place is all in the same small building and for the tour the only walking we did was from our seats on the bar to the back where all the tanks are located. We got some history of the building and a little information about the brewing process (but nothing too technical) as well as expansion plans. I liked that he basically said what was going on was a hobby that got out of control and that basically the guys who own this just like to drink beer and talk with new people. Beer snobs, these guys are not (although they certainly have the pedigree to be if they wanted). I got the feeling that at Liquid Hero no one would scoff if you asked to get, “whatever was the closest to Coors Light.” You’d simply be pointed in the right direction and maybe be given a suggestion of something new to try.

He also said how basically they can’t wait till they are big enough for him to quit his day job, which might’ve just been a great marketing tactic. It made me purchase a pint glass and I heard at least two other people doing the same in the name of the “American Dream.” 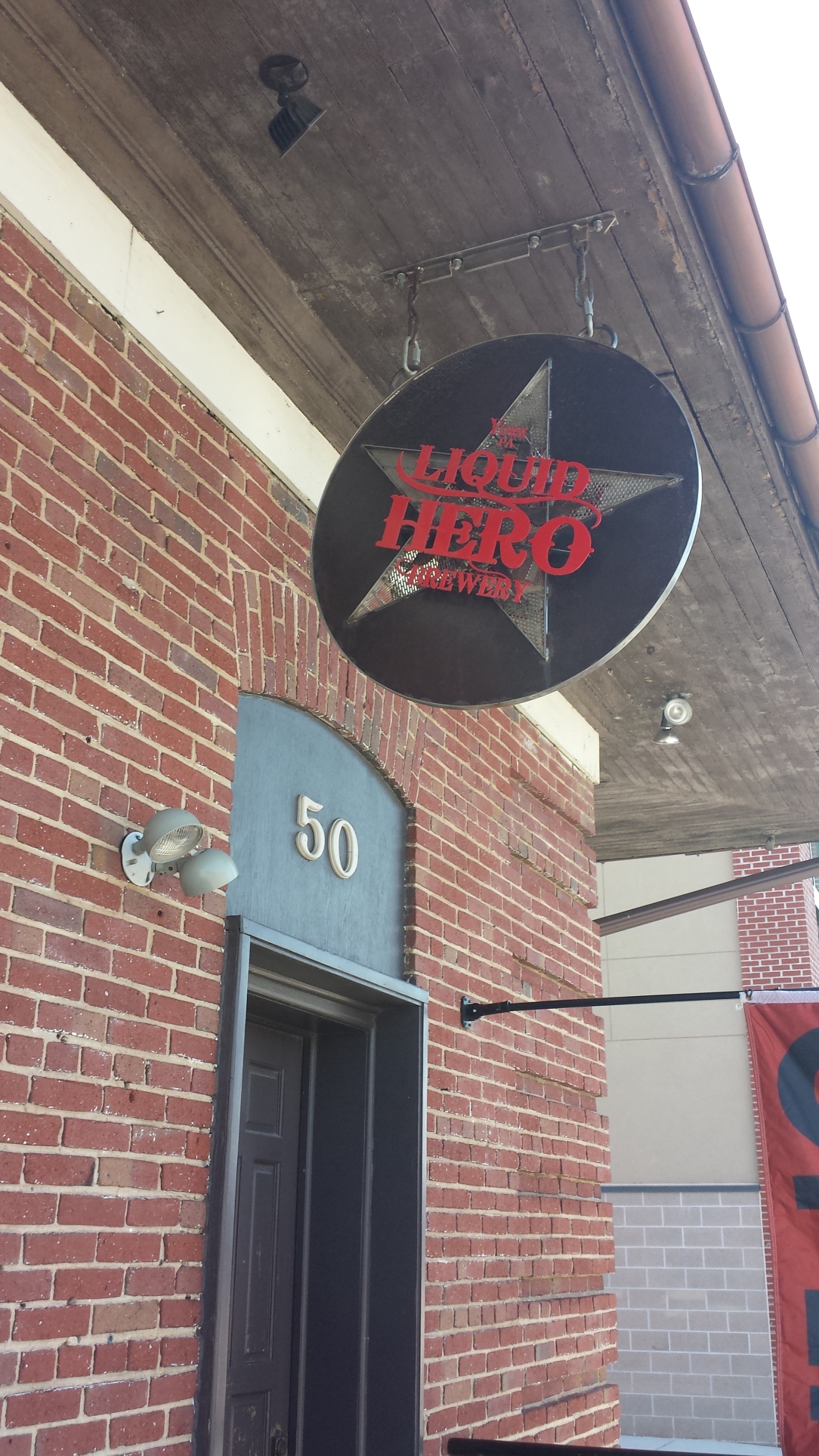 The deals on the Ale Trail only ran on Saturday from 12-5 so  in order to make it to Bube’s in Mt. Joy by 5, we had to cut out a planned trip to the Old Republic Distillery in Seven Springs, just a short drive south of York. I’ve been on plenty of brewery tours but never been to a distillery and even though I don’t really drink liquor myself, I’d still be interested in seeing what it entails. They have a tasting room (which, like, do you do shots? That sounds terrifying) and it looked like some of the liquor was fruitier “girly” liquor that I could probably handle. I also liked their website which paired a historical anecdote with each of it’s offerings. Did you know the term “United States of America” was coined in York while it was briefly our nation’s capital during the Revolutionary War? I’ve shared that with four people already! In other, somewhat-related south/central PA liquor news, there’s also a distillery in Lancaster, Thistle Finch, that I’ve never heard of but apparently run by all the time, which again, aversion to liquor aside, I kind of want to check out.

We made an amazing pitstop on our way from York to Mt. Joy. Behold: the shoe house.  I said it in my previous post on Route 30 and I’ll say it again. Central PA is weird. There’s no getting around it.

I’ve been to Bube’s (yes, it’s pronounced “boobies”) several times before, but never tried their home brews. I was excited to give them a whirl.

Bube’s is an interesting place. It looks like a mixture of an old castle and a warehouse (and I didn’t snap a picture of it because I’m literally the worst blogger out there) and has several different types of dining experiences. There’s The Bottling Works where I’ve been before and where we sampled beer on Saturday, the outdoor Biergarten, a fine dining establishment that has murder mysteries (that I will be avoiding-I’ve never participated in a murder mystery but I’m pretty sure I hate them on principle) and the catacombs, a cave-like basement dining scenario that I would like to check out. Bube’s often has bands and holds brewing tours and ghosts tours on certain Fridays and Saturdays of the month.

Our next stop in Mt. Joy was Zuckfoltzfus Brewing, a tiny microbrewery and gastropub that from the outside appears to look like a family house. The food there was way too sophisticated for me but the beer (we got another flight) was excellent. I’d definitely go back and loved that they had a front porch.

Once back home and safely parked in Lancaster we decided to grab dinner at Lancaster Brewing Company (who recently opened a Harrisburg location), even though the ale trail experience was over. We stopped for a quick drink at the Federal Taphouse, because it’s on the same block as me, which I only mention because I found this glorious Springsteen artwork that I’m pretty much plotting to steal and use to redecorate my apartment. You’ve been warned Federal Taphouse.

Being the sixth stop on our tour and all, we didn’t feel the need to get a sampler at Lancaster Brewing Co. (also, I’ve had most of their beer). I had my second order of wings for the day (Sorry, Mudhook, but if we’re competing, Lancaster wins) and washed it down with a Celtic Rose and Strawberry Wheat-Chocolate Milk Stout combo. Unfortunately, we weren’t able to eat outside on their new (ish) patio but we were seated overlooking the brewing system instead, which seemed an apt end to the day.