Weekly Check In: Lancaster Continues to be the Coolest

By brothwellp2 in Lancaster, Uncategorized, Weekly Check In on December 6, 2017
2 comments

I spent this past weekend in Lancaster for my friend’s wedding. Once again, I was left with the feeling that Lancaster is the unsung, coolest city in Pennsylvania, and I really shit the bed when I decided to move away.

The rehearsal dinner was at 6:30 on Friday. I arrived in Lancaster circa 2:00, because I’d made a hair appointment at the Black Comb, a barbershop that had opened up just down the road from my old apartment, a few months before I moved back home.  When I’d left, I believe the Black Comb had 3 barbers, and sat in a modest sized shop on Duke Street. I parked near the Central Market (because I wanted to do some shopping after), and walked to the location I remembered, only to find a chocolate shop. A quick google search told me they’d moved a block and a half away, to what I found to be a much larger with shop, with 6 chairs. I feel like the Black Comb’s expansion is indicative of general expansion of downtown Lancaster as a whole. Every time I go back it seems like something new is brewing (often times, literally), and something old I’m familiar with has somehow improved. The nice part, is that the old staples aren’t being thrown by the wayside. They stay, and continue to be great.

After a solid haircut, a quick trip to the market for some staples (Ric’s English muffins and Maplehofe Dairy chocolate milk for the Air BNB), a disappointing trip to Springhouse (only disappointing because they had no longer had pumpkin ale on tap), I checked into our Air BNB on James Street, a perfect location of walking distance to the train station and downtown, and just across the parking lot from Souvlaki Boys. Four of us stayed in this airbnb. It costs us each $75.00 for the weekend, which included a full three story home, separate bedrooms with queen sized beds, a full spacious kitchen, living room, dining room, and backyard. I’m keeping this place on hold, and in mind for future outings.

The rehearsal dinner was at the Cork Factory Hotel, which was fun for me as I’ve never been there (it was almost at Checkers, another new joint I’d like to check out). I can tell you that the Cork Factory Hotel has an excellent cheeseboard, very hot wings, and great shrimp scampi. We continued the celebration at The Horse Inn afterwards. I’ve talked about my recent love for the Horse Inn before, and am going to lament that fact that it was closed during most of my Lancaster tenure. The Horse Inn has a great tap list, a few people in our party said the cocktails were inventive and  delicious, but as a tried and true North Eastern Pennsylvanian, I was in love with their $2.00 mystery beer, and happily reacquainted myself with Hamms, Tecate, Genesee, and the crown jewel of the bunch: Genny Cream Ale. The Horse Inn also just has a vibe I love, and something undiscovered from my last visit: a great shuffleboard table.

We didn’t have a ton of time to really experience the city Saturday, because of the wedding and all, but my brother and I managed to make it down to Bistro Barberet for a breakfast chocolate almond croissants and fresh squeezed orange juice, and walked around Central Market some more.

We hit up American Bar and Grill on Sunday for a recovery brunch, and had a nice, sizable plate of wings that did the trick. ABG (as its colloquially known) only does brunch and wings on Sunday. Listen, I’m not going to complain about that ever. I was a tad disappointed though, because I really want to try their dinner menu. It looks so good (my order will probably be grilled mozzarella, fire roasted oysters, and the crab & bacon pizza).

The highlight of Sunday was 100% Tellus 360. The rooftop bar is adorned with Christmas trees, and a fireplace, and the bar up there is heated, covered, and served a delicious hot chocolate spiked with Rumplemintz. Any other afternoon I’d drink that out in the elements, but there was a traditional Irish session going on on the 2nd floor, and a particularly good acoustic Jimmy Buffet cover lead us back there. 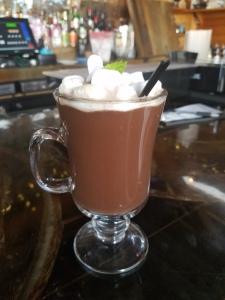 I finished my Lancaster weekend with dinner at Annie Baileys. I consistently underestimate the food at Annie Baileys. Last time I was in Lancaster I had one of the best burgers I’ve had this year there. This past weekend I had chilled, raw oysters, a great smoked salmon appetizer, and baked brie. The good thing about underestimation is consistently being blown away, although I keep being blown away by Lancaster, even though I might be its biggest fan. 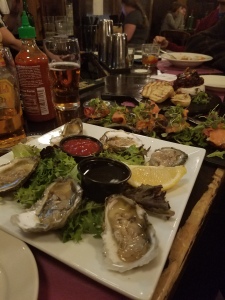 2 comments on “Weekly Check In: Lancaster Continues to be the Coolest”