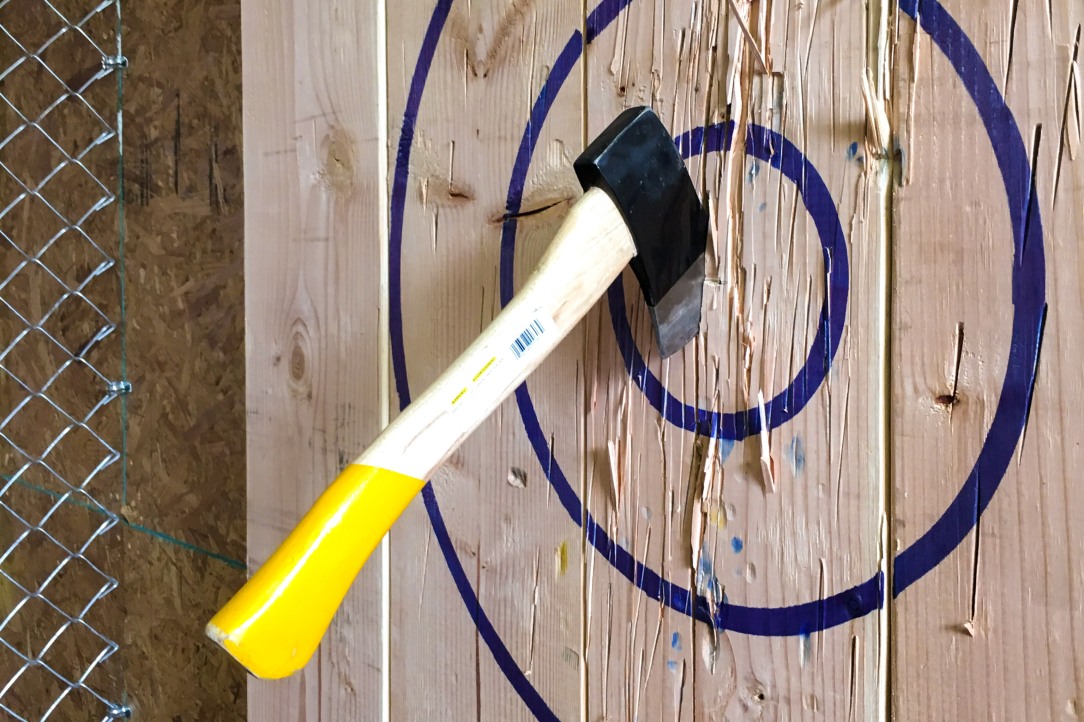 Weekly Check In: A Weekend Full of Weapons

It’s my friend Eric’s bachelor party this weekend.  I’ve been very excited about it ever since plans for what it was going to entail have been formalized. Eric is one of my more docile friends, so I was a bit surprised to see how aggressive the weekend was going to be. We’re going ax throwing on Friday, and shooting clay birds on Saturday.  See what I mean?

I’m excited for both our flagship activities, mainly because they’re both  unexpected, and not necessarily something I’d have picked to do myself.

Ax and hatchet throwing venues are apparently becoming a thing. I’d first heard about one opening last year in northern New Jersey, and sort of put it in the back of my mind as something to check out if I were ever in that area.  I mentioned it to Eric once, thinking it would be something he and I would have fun doing, and he was the one who informed me that Philly had its own, which is not only much more convenient for both of us, but much more on brand with my blog, since I occasionally forget I should be focusing on Pennsylvania. Urban Axes is located in Philly’s Kensington neighborhood, has a BYOB policy, and every group gets an hour of ax throwing instruction, before competing in some kind of tournament.  The only other real information I know about it is that you need to wear closed toed shoes, which seems like a fantastic policy. I don’t want to jump the gun, but I  have a feeling that I might be really good at this. Fingers crossed.

Topical Aside: My cousin is currently teaching English over in China for 9 months. I was chatting with him Saturday, and he was at a bar that doubled as an archery range. While I think having a few beers and throwing axes at a target seems like a great way to spend a Friday night, the whole bar/archery hybrid seems like an awful idea.

I’m cautiously excited about the whole clay-bird shooting experience. We’re leaving the greater Philadelphia area to do this, and heading up to the Lehigh Valley, to the aptly named Lehigh Valley Sporting Clays.  Just a warning, what I say next is not a political statement, just my how I feel. I do not like guns. I feel intrinsically uneasy around them, and up until a couple of years ago (ok, so five…time does fly), I hadn’t actually ever touched a real one.  Coincidentally, it was Eric who I went with all the way back in 2012.  I wrote about it here. So. I’m going into this cautiously, but trying to keep an open mind. I feel like I might feel better about a rifle than I did a handgun, and that maybe being outside will diminish some of what I can only describe as the claustrophobia I felt at the indoor shooting range.

We’ll see, and plans are to report back next week with reviews of both these activities.

Saturday night we’re renting a house in the Poconos, that boasts a shuffleboard table, and is within walking distance of three bars, including one that touts itself as Lake Harmony’s “premier nightclub.” That, I know I’ll enjoy.

2 comments on “Weekly Check In: A Weekend Full of Weapons”