By brothwellp2 in Philadelphia on January 25, 2017
No comments

I’m great at planning things. Sometimes I struggle with follow through. Sometimes that’s not a bad thing though.

I spent this past weekend in Philadelphia.  I was planning on going to a Frank Turner show at The Fillmore on Friday night, then meet my college roommate, who lives out in Conshohocken Saturday to attend the Jurassic World exhibit that’s currently running at the Franklin Institute. In fact, last Thursday, I tweeted, “Philly bound for the long weekend. Checking out the dino exhibit at the @TheFranklin, seeing @frankturner & also doing some non-Frank stuff.”  I should have added that even the “non-Frank” stuff was going to be somewhat Frank-related, as I also had planned to check out Fishtown, a Philly neighborhood I’ve spent very little time in, specifically some of the businesses located along Frankford Ave, a hipsteryish mecca of bars, restaurants, and shops.

Fishtown is a Philly neighborhood located northeast from Center City, somewhat bleeding into the Northern Liberties neighborhood. Like many neighborhoods, the border of Fishtown varies depending on who you ask, or where you look, but  it’s generally thought to be a triangle created by the Delaware River, Front Street, and Lehigh Avenue. Its roots are German, Polish, and Irish immigrants, and like many of Philly’s currently “cool” neighborhoods, it’s experienced bouts of poverty followed by gentrification. What separates Fishtown from its neighbor of Northern Liberties though, is a distinct grittiness. While the latter is all craft beer, locally sourced food, and CrossFit gyms, Fishtown still has plenty of dilapidation between it’s craft beer, locally sourced food, and CrossFit gyms.  It’s definitely not polished, and it’s dive bars have a sort of punk rock flavor I honestly feel is a pretty even mix between authentic and affected.

I’d been to both Frankford Hall, Philly’s best known, and original beer hall, and Johnny Brenda’s, a bar/music venue before, but both were just one-off visits. Despite visiting Philly frequently, my travels are generally limited to Center City, Queens Village, and Fairmount, just because that’s where most of my friends live and work. I was excited to see a new neighborhood I’ve always heard a lot about, but haven’t experienced first hand.

My concert was at 6:45 on Friday night, so my first thought was to get to get to Philly early, and start off my day in a healthy manner at Go-Vertical, a rock gym located between the Sugarhouse Casino and Yards Brewing Company, before lunching in Fishtown. I was then going to use Ride Indego, Philly’s bike-share to check out two local breweries, St. Benjamin Brewing Company, and Philadelphia Brewing. I planned on walking from Philadelphia Brewing Company down Frankford Avenue and planned to stop at Little Baby’s Ice Cream, a local shop known for their strange flavor combinations, and Kensington Quarters, a butcher shop/restaurant hybrid, maybe with some time exploring one other local bar, before attending my show, and then getting to bed at a reasonable hour, so that I could be well rested for my full Saturday.

Murphy’s Law kicked in almost from the get-go. Well, not the get-go, but pretty soon after.  There was nothing Murphy’s Law-like about my accommodations. I stayed in an Air BNB, which I think helped to lend some credence to a real Fishtown experience. It was one bedroom (I was flying solo that night) two blocks over from Frankford Ave, and while I didn’t spend a ton of time in the place, I think it warrants a shout out. The guys who run it had the living room designed as the type of place you could hang out, had local craft beer in the fridge for a dollar a piece, and had compiled a whole list of resources about the neighborhood for those visiting. I would highly recommend. 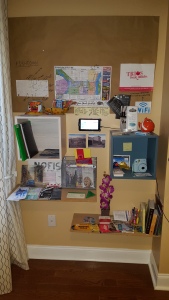 Murphy’s Law did kick in when I decided to travel all the way to Center City for breakfast. Now, there are plenty of places to eat in Fishtown, however I decided I’d like to get breakfast at Reading Terminal Market, just because eating there is on my New Year’s bucket list.  I forgot however, that particular Friday happened to be a particular inauguration people were not happy about, and the area around Reading Terminal was something of a zoo. Getting there took far longer then I wanted, and I didn’t feel like pushing through crowds, was starving, and ended up with a decidedly non-locally sourced McGriddle. I decided to Ride Indego back to Go-Vertical, and when I said all the way to Center City before, I was being misleading.  There’s not much to choose from in regards to hotels in Fishtown, so if Air BNB isn’t your thing, you’d want to stay in Center City. It’s pretty close though, if you walk, bike, or cab down Columbus Blvd., it’s just a ten minute traverse. Walking or biking would be ideal, as it’s on the river and affords great views of the skyline, which is why I chose that route, even though it’s January. I had a nice, albeit a tad chilly, drive through portions of South Philly, cutting down Christian St. to Columbus. Once I was on the bike trail there, it started to pour. Columbus is a great quick route from one end of Philly to the next. It’s not a great place to try and hail a cab, so I biked through the rain till I got to the border of Fishtown. At that point, I was freezing cold, and soaking wet, and decided to eschew the gym for a hot lunch.

This is where the day started looking up.  I ate at the Street Side Shop, a cool little Southeast Asian place on Girard Ave. When I lived in Lancaster, I lived directly above a pho shop, so am always on the lookout for them when I travel, as they are non-existent in NEPA.  I’d highly recommend this place to anyone in Philly. I got a great bowl of pho, and some delicious shrimp and garlic dumplings to start. It was the perfect meal to warm you up after being caught in the pouring rain. I even know what I”m going to get when I return: the pho and shrimp dumplings again, but also the pork and chive dumplings, oysters, and beef skewers.

I decided to ditch the bike for the rest of the day, and headed back to my Air BNB to shower, and curl under the covers for a bit, before heading out the breweries.  Instead, I fell asleep for 3 hours. By the time I woke up and showered, I was due to meet a friend for dinner.

Kensington Quarters was the one portion of my planned day that happened. We went for their 5-7 happy hour, I had a couple really great beers from Forest & Main (the number one brewery I’d been wanting to check out in 2017), along with a nice chacuterie sample, a great burger, and the standout, crispy potatoes with a chili/garlic aoili, reminiscent of the type you get a tapas bars.  Kensington Quarters has a more extensive dinner menu with larger cuts of meat to sample, and I really want to go down for one of the exceedingly popular butchering classes they put on.

Thus began our journey down Frankford Ave.  We stopped in the Cake Life Bake Shop directly next door to Kensington Quarters, where I had a great bourbon pecan cookie, dropped by Frankford Hall for a quick pint of Hefeweizen, and then stumbled upon Weckerley’s Ice Cream, which will tie with Kensington Quarters as my favorite find of the day.  They are a locally sourced ice cream shop whose specialty is home made ice cream sandwiches. I had butter pecan bourbon (I guess I like that comb), and have been dreaming about it since. 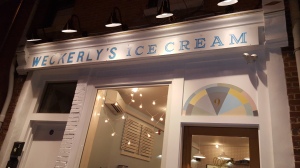 The day concluded with a quick stop at Johnny Brenda’s, a 2 beer/shuffleboard/ski ball drop in at The Garage, a really cool bar which looks like it’d be an ideal summer hangout (and has one of the largest selection of cans in Philly–I panicked and got a Narragansett), and then another beer at Murph’s Bar (true neighborhood dive, no website).  At that point my friend and I were having such a good time, that I also decided to skip the concert (I was going to go solo) and join her and my sister, who’d just got out of class, over at Standard Tap over in Northern Liberties.

I did not make it to bed at a reasonable time. Saturday morning required much Gatorade.

While I hadn’t set out to do everything I planned in Northern Liberties, I could say I got a solid taste of what the neighborhood has to offer, and look forward to eating and drinking my way through it another day.

I also didn’t make it the Franklin Institute the following day. The Women’s March closed down Ben Franklin Parkway. That’ll have to sit on the to-do list along with another visit to Fishtown.