A Visit to the Yuengling Brewery 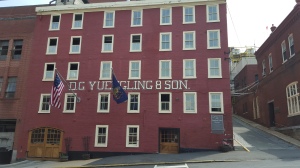 Think about what things you consider to be inherently Pennsylvanian. For someone born and rasised here, the answers might be biased. For example, I’d always include kielbasa and pierogie on that list, however, there’s plenty of people outside of my small corner of Northeast PA who don’t know what those foods are, and I certinaly don’t think Joe Six pack from Alaska (Or was he from Kentucky?) is going to associate the Keystone state with delicious dumplings full of potatoes, or Polish sausage. So think that if you asked someone from out of state, what would be common PA associations. Definitely cheese steak. Probably Rocky. Maybe The Office.  The Amish for sure.  Heinz.  Penn State Football.  Probably Hershey. Definitely Yuengling.

I say definitely, because I have out of state family that used to buy cases, before it was more readily available, when they came to visit. I’ve had people I’ve met out of state say things like, oh that Yuengling’s good, when telling them where I hailed from.  I know it because Yuengling is the top craft beer producer in the country at the moment, and the 4th biggest brewery operating in the US right now, and while beers like Busch and Miller don’t conjure up images of a specific place, Yuengling is intrinsically Pennsylvanian.

I’ve been running a Pennsylvania-travel themed blog now for the past four years, have been going on brewery tours essentially since I’ve been 21, and yet it’s taken me up until last weekend to finally visit and tour the Yuengling brewery. It’s embarrassing, really.

One of the reasons it’s taken me so long to get to Yuengling is that during the week the tours only operate in the morning. Monday through Friday, Yuengling offers tours at 10:00, 11:00, 12:00, 1:00, and 1:30, so for me, those were always out. Saturdays are kind of tight too, but I’m assuming easier for a lot of you to make (however, the website does warn that Saturdays get very crowded). The tours start at 10:30 and then depart every 45 people until 1:30.  Now, my Saturdays are often free for travel, specifically Pennsylvania beer tourism, however, the Yuengling brewery is located in Pottsville, the county seat of Schuylkill County, smack in the middle of hard-core coal territory, and in my mind, not close enough to anything else to warrant a Saturday trip there.

The tours are free. They start from a brand new store/tap room/museum, that as per my tour guide, at this point has only been open for eight weeks. You simply go in, get a wristband, and wait for your designated start time.  I got there a couple minutes early and browsed the giftshop, as well as museum, but if I were you, I’d plan on getting there about right on time, and then going to the museum afterwards. It’s small, doesn’t take too long to walk through, and was reference a couple of times during the tour, which meant I ended up going back to the museum to double down on those references.

The tour lasted a little over an hour, and visited the original brewhouse, the caves dug below that, and the bottling/canning room. The bulk of Yuengling’s brewing is no longer done in downtown Pottsville, but rather in their facilities a couple of miles away in Port Carbon and Tampa Florida, however, in order to keep their title as America’s oldest running brewery, the original facility needs to continuously produce beer.

The tour ended at a brand new tasting room, where two samples were provided, and additional drafts and bottle, as well as growler pours, were also provided for an additional cost. I had a little bit of driving ahead of me, which was why I decided to opt out of that portion.

I liked the tour, because while they did touch on how beer was made, the emphasis was definitely on the history, which for me, is one of Yuengling’s biggest draws.  I learned that during Prohibition the brewery survived by making ice cream (a cousin of the Yuengling family actually still makes some today) as well as brewing their Porter, which was used for medicinal purposes by pregnant women, and speaking of Prohibition, on midnight of the day it was appealed, kegs of beer were loaded onto a truck and shipped directly to the Whitehouse. 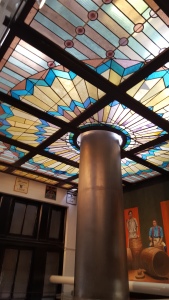 It’s the historical anecdotes like this, that make this brewery tour pop, and that makes Yuengling brewery unique in to itself. Sure, Miller, Coors, and Busch all have storied histories, but none as long as Yuengling, and or as locally based.

I enjoyed myself on the beer tour, and anyone who enjoys beer, likes history, and wants to visit what essentially is a flyover part of our state, I think would have the same experience.  I also feel like any resident of Pennsylvania, should visit whether or not you like beer. As we’ve established earlier, Yuengling is a Pennsylvania institution. Think about it. A lot of regional beers have died, or never existed at all. New Jersey doesn’t have a beer associated with it. Delaware certainly doesn’t. Upstate New York has Genesee, but I mean, Yuengling is widely held in high esteem (and I’m saying this as someone who enjoys a Genny Cream Ale from time to time). Baltimore has Natty Boh, and Rhode Island has Narragansett (which, by the way, I legitimately love), but neither of them have the recognition or association with Pennsylvania as Yuengling does. I think you’d be pressed to find another American beer, so heavily ingrained in the culture of its state of origin. So while I implore beer and history lovers to go visit Yuengling because I think it’s a fun way to kill a morning, I think PA residents should do so, because it’s practically your patriotic duty.

2 comments on “A Visit to the Yuengling Brewery”