A Day at Bethel Woods, the Original Woodstock

You’d think that unemployment might be relaxing, filled with days of daytime television, countless hours on Youtube, and a lot of late nights. Quite the contrary,at least for me. Finding a job is pretty much a full-time job, with plenty of work done after the 9-5 confines of a normal work day, and no weekends off. I also have been cutting down on my weekend frolicking, both to spend more time job hunting, and keep in mind that the money coming in is not what it used to be. Anyhow, a couple of weeks ago I got a little stir-crazy. Cabin fever you might call it, if it was winter and I didn’t like the snow, but semantic aside, I felt like I needed go somewhere, out of NEPA, but that wasn’t going to take a ton of time or money. Bethel Woods was the perfect solo road trip.

The Bethel Woods Center for the performing arts, located in the tiny hamlet of Bethel, New York, is a concert venue built on the site of the original 1969 Woodstock concert site. Aside from the arena, which is probably the nicest outdoor venue I’ve ever seen a show at, the complex houses a Woodstock Museum, which is what I was going to see.

Now, bear in mind that I’m not one of these people who romanticizes living in the age of peace and love. When it comes to the 60’s sound, I tend to gravitate more towards Sinatra and classic Beach Boys rather than Jimmy Hendrix, and the notion of sharing everything I have with strangers seems completely unappealing. Sharing everything with boatloads of strangers who are under the influence of various forms of narcotics in a muddy field for three days seems like a nightmare to me. Still, I’m a big music fan in general, and am a huge history buff, so took the word of my parents, who visited the Woodstock Museum this summer and loved it, that I would really like it, especially since my father, who abhors hippies and whose favorite song is “My Way,” enjoyed it so much.

Bethel is actually only about forty minutes from where my parents live, and a very scenic drive, especially on a nice October weekend. But in general, it’s pretty easy to reach if you’re anywhere in Northeast PA and an easy enough day trip for anyone on the eastern/central portion of the state. What’s more is I’d easily recommend taking a weekend trip up here. I spent a good 5 hours in the museum and walking around the grounds and probably could have stayed longer if I’d wanted to.

The museum isn’t huge, but it’s very colorful, very visually oriented, and very interactive. There’s your typical memorabilia and displays, but also a number of videos, which is what I found to be the most informative, especially since many of them used footage from the actual event. The museum gives a brief cultural history of the American mindset during the 60’s, a look at how music evolved, and a look at how the music industry evolved, before diving into the actual planning and execution of the Woodstock Music and Arts Festival (which is it’s formal name). 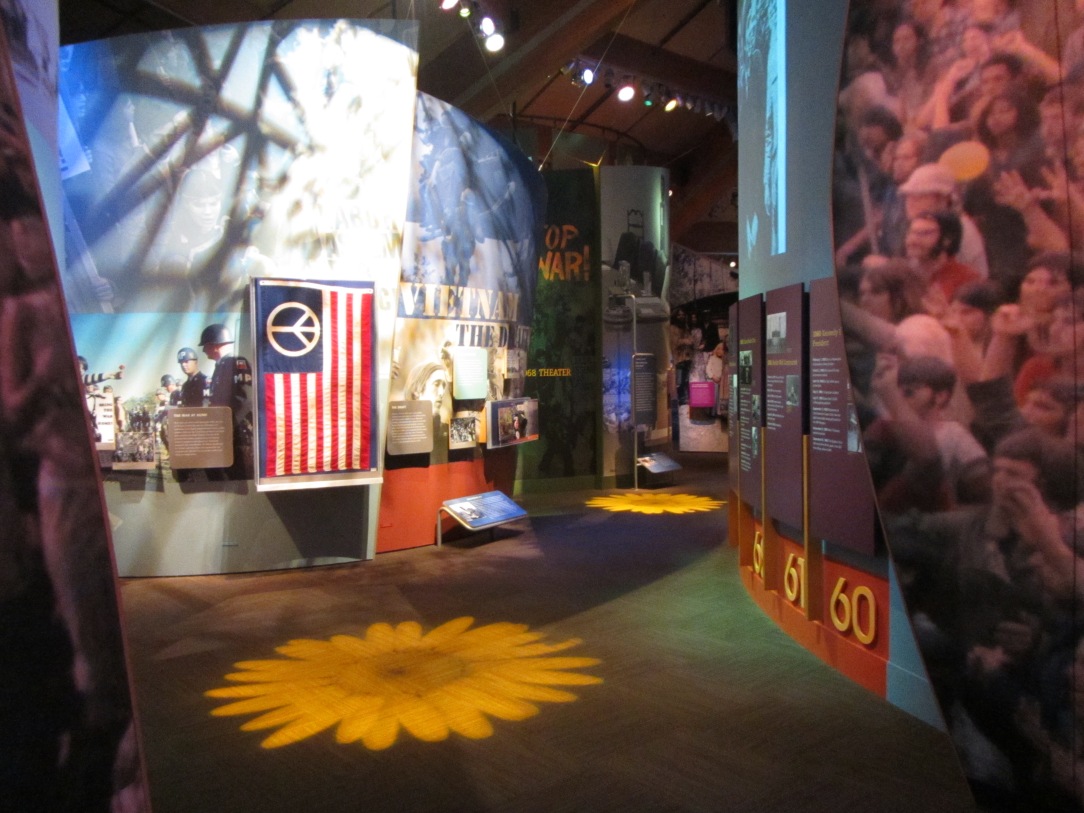 You know what else I really liked about the museum? They didn’t idealize anything. That’s not to say that they didn’t present Woodstock as the cultural milestone that it was, and the town is obviously still very proud of this achievement, but the museum is very upfront with the fact that Woodstock initiated as a business venture. It wasn’t just a bunch of freewheeling souls looking to groove out together. It was some skilled marketers and entrepreneurs who got the ball rolling. They also depict how unorganized it was, how unprepared the town of Bethel was to accommodate all these musicians and concert goers, and how primitive the conditions were once people got there.

To me, one of the most striking images was the traffic that literally clogged the roads into Bethel for miles. The town became a gridlock. It’s population is somewhere around 4200, and during the festival 500,000 people came for Woodstock, making it the third largest city in New York at the time. It was impressive to see, maybe partially because the “getting to Woodstock” video was housed in a psychedelic school bus. Inspired by what I saw, I rented the movie Taking Woodstock when I got home that night, and while the story was just ok, it did an awesome job of recreating (at least I think) how crazy the town must have looked/felt.

I also really enjoyed a 360 video experience where you laid down on bean bags and were given an overview of what the days of the concert looked like. They showed live concert footage, simulated the storms that plagued the grounds that Saturday, and all in all immersed you in what it must have felt like. I think I viewed all the videos offered, except for the last one, that I imagine the curators of the museum want your trip to cumulate with. It’s a 30 minute film about the music of Woodstock and when I reached it, it was 5 minutes in already, so I would’ve had to wait 25 minutes for the next show. Like I said, that genre of music really isn’t my thing. Aside from The Who and Janis Joplin, I wasn’t even familiar with most of the acts, and admittedly the only Who song I really enjoy is “Teenage Wasteland (I’m a cliché, I know). I also can’t name more than two Janis Joplin tunes, even though “Bobby McGee” and “Piece of My Heart” are two of my favorite songs.

Like many museums, the Woodstock has rotating exhibits in its basement. The two that I saw were “Remembering Woodstock, A Timeline of Reunions,” featuring the posters and memorabilia from official  Woodstock reunions, as well as “Speak Truth to Power”, an exhibit from the Robert F. Kennedy Center for Justice & Human Rights, which features large-scale portraits and stories of human rights activists in honor of the 50th anniversary of the Civil Rights Movement.

After viewing these rotating exhibits, I took a walk around the center’s grounds. They distribute a really cool brochure that has a map of the grounds superimposed with where things were situated during the 1969 festival. It’s cool because after the museum you feel you know places like Max Yasgur’s farm, “the woods,” and the campsites. I walked down to the Woodstock Memorial, which had a number of “past” Woodstock participants standing around telling stories. I say “past” in quotations, because someone at the museum that day (I can’t remember who) said that if everyone who claims to have been at Woodstock were actually there, the numbers would have been somewhere closer to 1.5 million.

I was hungry after my excursion, and so grabbed lunch at the Dancing Cat Saloon, a cool Victorian house styled bar on the grounds of the Catskill Distilling Company. The wings I had were good and I grabbed a few too many pumpkin ales with a friendly middle-aged couple sitting next to me, who were up for a craft beer festival being held there the next day. The bartender told us how they were having a bunch of bands outdoors that night which is why I think a weekend trip, or at least overnight stay, probably wouldn’t be a bad idea. The distillery had a great lawn with Adirondack chairs and fire pits that looked awesome. 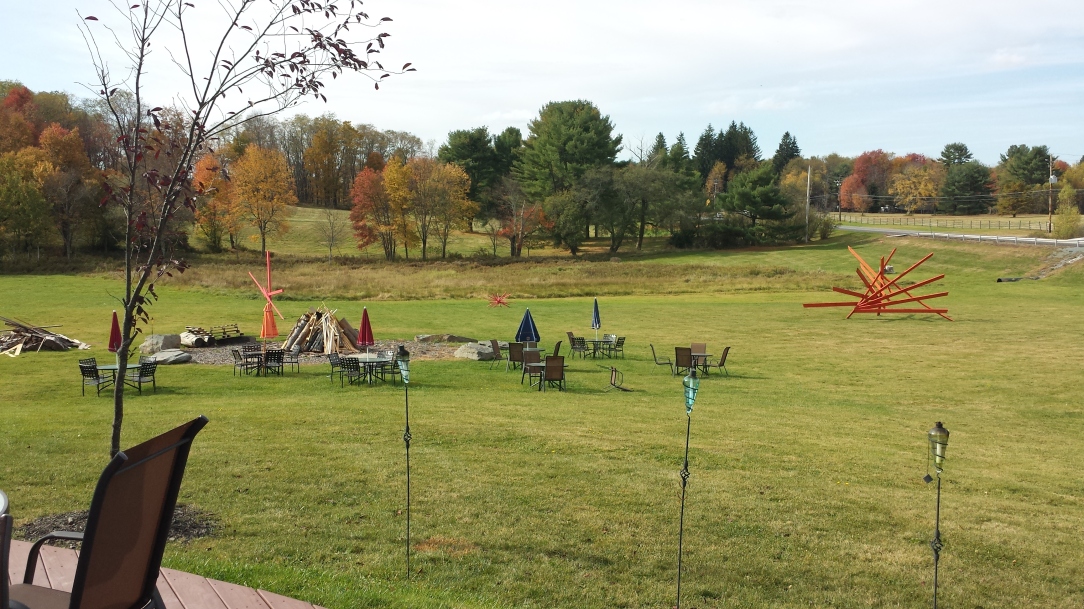 I had all intentions of doing a tour at the distillery, but when I walked in a little too buzzed and the bartender started asking me about what “subtle flavors” I liked in my whiskey, I just mumbled something about getting one for my dad that most resembled Bushmills, and figured I better call it a day.

I truthfully haven’t been this impressed with a museum in a long time. If you’ve been reading this for a while, you’ve probably heard me say before that I think most museums have a lot of potential, but end up being overly basic or whitewashing the subject matter. The Woodstock Museum did neither. It was informative, it was interesting, and I learned a heck of a lot more about Woodstock than I ever knew.

On a related note, were you wondering at all why Woodstock took place in Bethel, and not the actual town of Woodstock, which would have been much closer to NYC, had a better time accommodating all these people, and had the decidedly hippie/artsy vibe Bethel did not? Well, it’s all explained in the museum if you go (or via a simple Google search if you’re lazy).

3 comments on “A Day at Bethel Woods, the Original Woodstock”