Historically I’m a terrible bike rider. I bought one three years ago because I felt like all my friends were starting to ride a lot and because I envisioned myself as that cool urban dweller who did things like biked to the gym or local brewpub or CVS because I was both health and eco conscious. I took out my bike twice in NEPA (even buying a fancy car holder to transport it from Lancaster); the first time was fine, the second time I somehow caught a shoe lace in the gears and ended up with a very bloody shin. I took it out once in Lancaster and for someone who regularly runs and counts cross-country skiing as one of their favorite hobbies, the ups and downs turned my legs into jelly. My bike has since been gathering dust in my walk in closet, leaning forlornly against an air mattress, some old luggage and my Santa Clause suit (sidenote: don’t judge, everyone should have Santa suit lying around).

You might be looking back at the title and thinking, “where’s he going with this?”, but stick with me. There’s a redemption arc in this story, as just last week I participated in Philly Bike Tours’ first inaugural beer tour and couldn’t have had a better time. In fact, just this past weekend I actually dusted my bike off, put some air in her tires and took a quick spin around downtown Lancaster.  I’d never necessarily been anti-bike. I just thought it didn’t work for me, but was still excited and open to the idea of a bike tour when Josh from the Philly Bike Tour Company and I starting corresponding via twitter about setting up a  tour.

The Philly Bike Tour Company was founded in the fall of 2013 and is based out of Fairmount Bicycles, right on Fairmount Ave (right under the nose of one of my favorite Philadelphia attractions, the East State Penitentiary) whose mission is to show off the city of Philadelphia the best way they know how: via bicycles. Tours are kept small and manageable (they cap them at 8) and include bike rentals, helmet and a water bottle with the price of admission. Each tour has a guide, who leads your tour and shares information and a sweeper, whose job it is to bring up the rear, make sure no one gets lost, and repair any bicycle related malfunctions that may come your way.

At the moment they offer five different tours: The Classic City Tour, which covers your hallmark Philadelphia landmarks like the Art Museum, Italian Market and Old City; The Northern Neighborhoods Tour which visits North Philadelphia, Fishtown and Kensington; The Beer Tour, which celebrates Philly’s rich brewski-laden history with stops at local brewpubs and breweries, both functioning and defunct; The Outdoor Art Tour, which, just like it sounds, explores the urban outdoor art scene in Philadelphia; and the Fairmount Park Tour, which covers the largest urban park system in the country (take that Central Park!).

There were a number of things I found appealing from the get-go about Philly Bike Tours. I liked that they were small-with groups of 8 you get to feel comfortable enough to foster the kind of conversation where you learn more than just the standard tour guide dialogue. Biking is also a unique way to see a city and ostensibly provides you with more maneuverability and access than a bus (or god forbid duckboat) can muster. Finally,  I like the idea of learning something while being active. I figured that while I might be bicycling-challenged, it was an opportunity I couldn’t pass up.

So guess which tour I chose?

Obviously, the beer tour. If you’ve even read just a couple of my previous posts you know that my ideal weekend activity involves beer and athletics and that I’ve spent the past month basically brewery hopping around southern Pennsylvania. This seemed like a win win. Nevermind that the last time I mixed alcohol and cycling it resulted in disaster (but really when you combine tequila and Florida, two plagues on society what else could the outcome be?), I was ready to give this a go.

Matt, the beer tour’s guide is actually an assistant brewer at Nodding Head Brewpub (one of the stops you make) and a beer aficionado, so he knows what he’s talking about. We got to chatting before the tour began and I found out that he was also a big Springsteen fan and hailed from NEPA, so I knew I was in good hands.

You know what the main thing I took away from the tour was? Pretty much every major invention and many major historical events are more beer centric than you think. The refrigerator was invented to keep beer cold. Pasteurization was invented so that beer wouldn’t spoil. The founding fathers were pretty much buzzed the entire time they planned the revolution and George Washington was actually 6 hours late for the first ever Presidential inauguration because he was hungover. I also learned that Rutherford B. Hayes was secretly a huge boozehound and because of this his wife wouldn’t let him keep alcohol in the White House, which at least  gives him some definition, rather than being one of the random mid 19th century Presidents that have no defining feats or characteristics (here’s looking at your Millard Filmore). 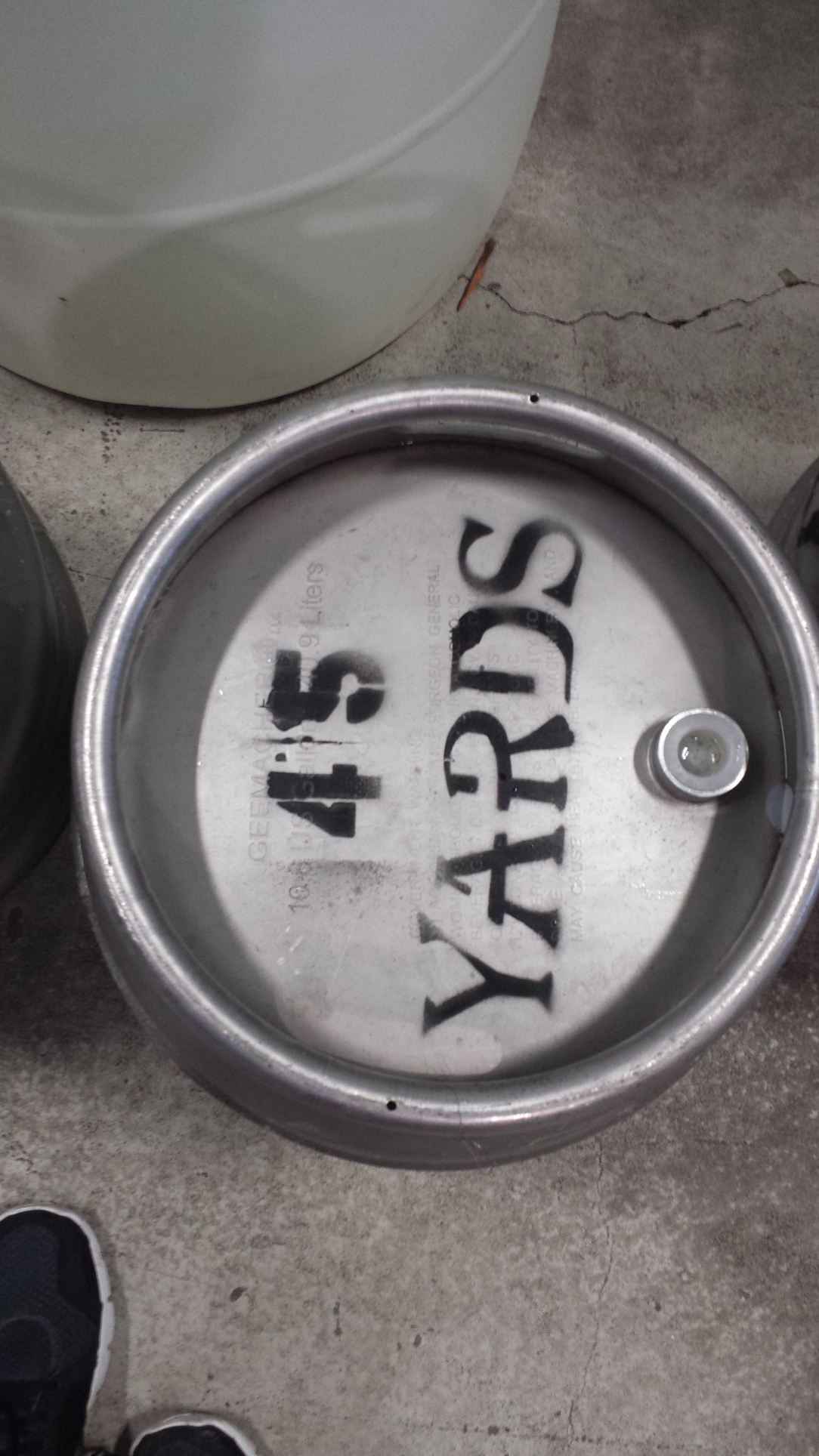 One thing are guides stressed about the beer tour is that it’s not a pub crawl, and while you do indeed sample brews, it’s more of a beer infused historic tour of Philadelphia. That was actually one of my favorite parts about it the tour. It was a great mix of riding, city history, beer history, and actual  tasting.

As for beer tasting stops, there are three of them: Nodding Hill Brewpub, City Tavern and Yards Brewing Company. 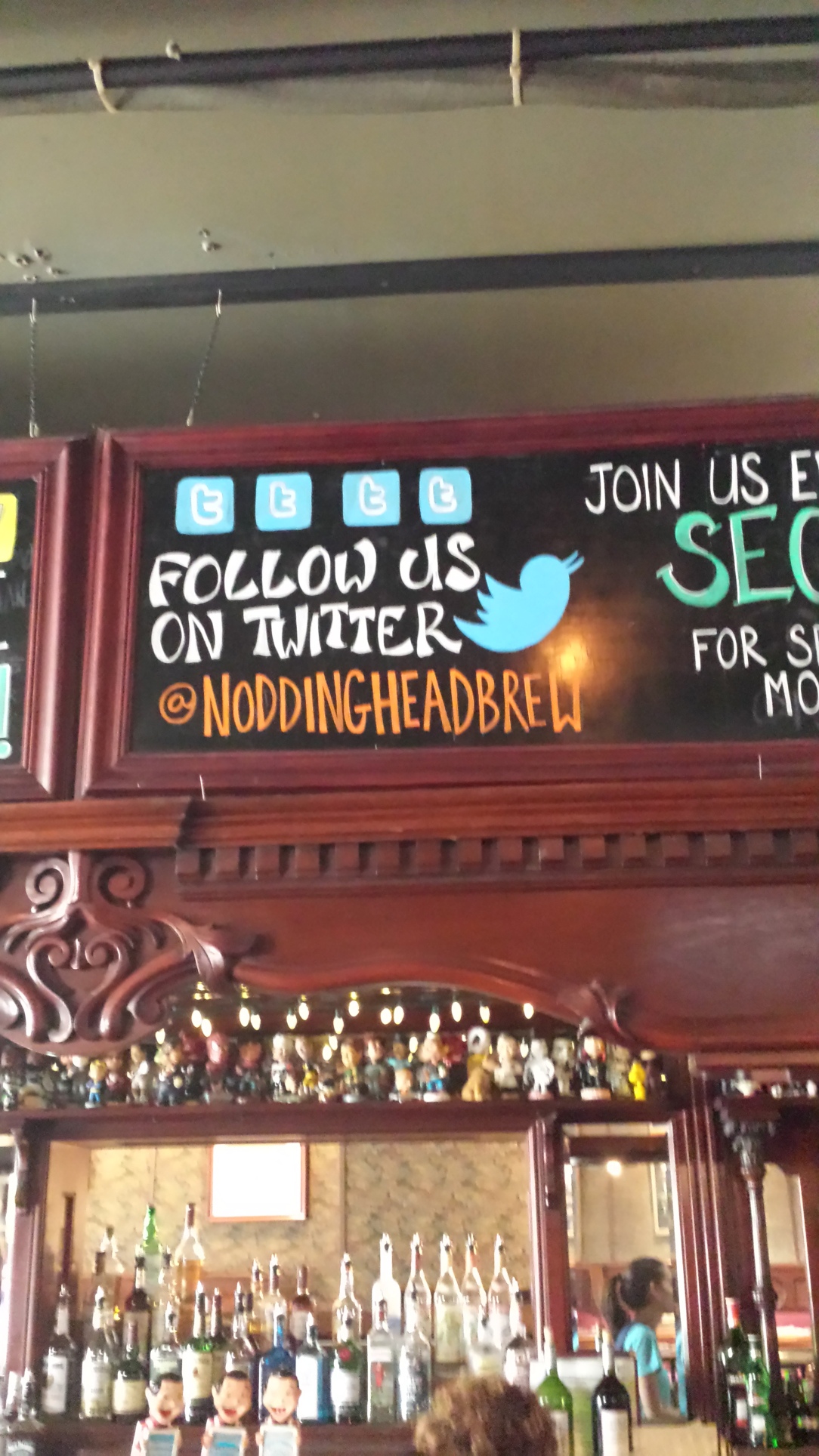 Nodding Hill Brewpub is the only brewery that’s located within the confines of Center City.  I’d always heard of Nodding Head and once I found out its location was embarrassed I’d never been. It’s only a couple of blocks away from where my sister lives and literally a few doors down from Oscar’s, one of my favorite Philly dives. We stopped there first and I had a vanilla latte stout while Matt gave us a nice in-depth behind the scenes tour of their beer making process. It was nice to get this early on in the day (especially if you don’t know anything about beer making) so you get a refresher on all the brewmaster jargon.

City Tavern was our second tasting spot. It’s one of the oldest bars in the country, established in 1773, and while they don’t brew any of their own beer, we tasted  Yards’ “Ales of the Revolution” series of beer, which are only very slightly tweaked versions of actual recipes brewed by Thomas Jefferson, Benjamin Franklin and George Washington.

Yards was our final tasting spot. As a brewery they’ve really taken off in the past couple of years and our one of the biggest exporters of beer from the Philadelphia beer scene.

It’s an impressively large facility and we were lucky that Matt happened to know one of the brewers who gave us an impromptu tour of the actual brewery and bottling facilities. I also spotted a shuffleboard and automatically respect anyone who installs one in their facilities.

While it’s not necessarily a “Philadelphia beer,” stop, after the tour was finished I joined Matt, along with Shelly, the creator of Philly Bike Tours at the Urban Saloon in Fairmount and grabbed an additional drink. I did this tour solo, which I’d recommend if you can’t find anyone to go with as they were both extremely laid back and easy to talk with (and again, the small group size keeps things conversational and informal).

Probably my second favorite part of the tour was seeing the city from an alternative viewpoint. Yards is located on Delaware Avenue and cycling along the Delaware River and underneath the Benjamin Franklin Bridge was really very cool. Additionally, you make several historic talking point stops, which I alluded to earlier. Several of these were in Northern Liberties, a neighborhood of Philly I’d heard about frequently, but never actually visited myself.

You know what secondary thing I took away from the tour was (hint :I foreshadowed this earlier)? I don’t hate bike riding. In fact, I was somewhat shocked to discover that during the course of the tour I’d covered approximately 11 miles in 3 hours. My legs felt fine, I never felt like I was falling behind, and the guides always made sure I felt safe navigating the urban environment. In fact, I’m looking forward to exploring other cities via bicycle tour now, that’s how much I enjoyed myself, and I’d certainly be up for patronizing Philly Bike Tours again in the future. I think the Fairmount Park tour and Northern Neighborhood Tour would both give me new insight into further parts of Philadelphia I’m unfamiliar with.

I really can’t recommend this tour enough. If you’re planning a trip to Philly, try your best to work it into your itinerary and this would be a great way to kill an afternoon for those of you with in day trip driving distance. Actually, I believe even those of you who call Philadelphia home would learn something new on one of these tours.

Word to the wise: be smart and take a cab home. I thought I was fine to walk from Fairmount back to my sister’s center city apartment. I was that night. I regretted that decision the remainder of the weekend.