From a town known as Wheeling, West Virginia
Rode a boy with a six-gun in  his hand
And his daring life of crime
Made him a legend in his time
East and west of the Rio Grande

I’m a sucker for any locale that’s mentioned in a song, movie or television show that I’m familiar with is initially how Wheeling, West Virginia, seen above in Billy Joel’s “Ballad of Billy the Kid” first came on my radar as a new installment for my “Weekend Trip Ideas” which is now officially back after a holiday hiatus.

Wheeling is a small city of approximately 31,000 (but with 153,000 in its metro-area) that’s an hour and half ride from Pittsburgh and actually sits only 11 miles from the Pennsylvania border in the Ohio River Valley (if you really want, you could float down from Pittsburgh). I always see signs for it when I go out to Pittsburgh to visit my brother and always say to myself, “Oh it’s that town from the Billy Joel song, I need to visit there someday,” but because usually when I see the signs for Wheeling I’ve already spent four hours on the Turnpike, I have no desire to do any more driving and just stay in Pittsburgh for the duration of the trip.

I did some research and found that Wheeling was originally a colonial British settlement in what was then western Virginia, which surprised me because I didn’t know they’d settled that far west during the Revolutionary War period (then again, most of my Revolutionary War trivia these days comes from watching Sleepy Hollow, so I shouldn’t be surprised).  The West Virginia Independence Hall (which still stands) was also where a portion of the state succeeded from the Union during the Civil War, which I was also unaware of. Researching Wheeling has been a nice little history lesson for me.

Some other Wheeling highlights include the Victoria Theater, the oldest theater in WV which hosts the “Wheeling Jamboree,” Wheeling and West Virginia’s version of the Grand Ole Opry, the eleven mile Wheeling Heritage Trail which runs up the Ohio riverfront, the Mt. Wood House (a castle like structure owned by the city and free to the public), and  the Wheeling Suspension Bridge, which is the oldest suspension bridge still in use in the country today.

If you want to head outside of town and are visiting in the winter, try Grandvue Park, which has XC ski rentals or the West Virginia Penitentiary, which is the most appealing attraction to me.  Much like it’s Eastern State counterpart, is a very old and allegedly very haunted ex-prison with a very violent and bloody past. The jail was completed in 1876 and operated as a maximum security level prison until 1995. It was home to several major prison riots and has reportedly one of the highest levels of paranormal activity in the US. You can take historical tours during the day, night time ghost or ghost hunting tours and can even spend the night in the prison for a nice chunk of change. 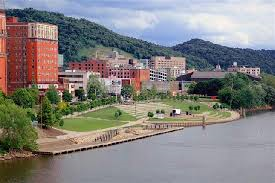