By brothwellp2 in Iceland, Uncategorized on July 12, 2013
3 comments

If I had to pick, Sunday was my favorite day in Iceland.  Since we didn’t actually make it to bed till early Sunday morning we woke up a little after noon.  We’d talked the day before and decided  that if possible we’d rent a car and get out of Reykjavik to find some hot springs.  Budget rent a car sent a van to pick us up from the hostel at 2.  Our plan for the day was to first visit the Nautholsvík Thermal Beach before heading to the town of Hveragerði, forty minutes west of Reykjavik on Iceland’s Ring Road, known for its thermal activity and hot springs.

The thermal beach was a little bit of bust.  It’s man made and geothermal water is pumped into the Atlantic to make it suitable for swimming (it’s open in the winter which is probably cool to try).  There are several hot pots around the beach but it was a nice day and by the time we got there it was too crowded.  We sat at the beach and ate our Subway lunch before continuing on.

We then drove to Hveragerdi.  The drive itself was reason enough to rent a car.  One odd thing about the Icelandic landscape is that in general there are very few trees.  It feels as though you could see for miles.  Hveragerdi is located in a valley, so just before arriving in town, your gifted with an amazing view as you drive down the side of a mountain (and if like me, you’re scared of heights, you’re also gifted with a severe case of anxiety).

The town itself is small and houses a geothermal exhibit as well as an exhibit on earthquakes however both were closed since it was Sunday.  What was noticeable were the tufts of geothermal steam emitting from all over the outskirts of town.  We’d previously read that to find the hot spring river we were gunning for you simply had to drive to the end of town, follow a trail, and you’d find it after an hour or so.   The visitor center was closed so we figured we could find it easily enough on our own.  We drove to what we believed was the end of town and went for a nice stroll through a river valley before realizing that it wasn’t what we were searching for.

I pulled out my phone and did a little online research, finding that we had to actually drive about a mile outside of town to a region known as Reykjadalur where the trail started.  Sure enough when we drove down the road labeled Reykjadalur we found a full parking lot and small restaurant called the Hot River Café.  The websites said that from the café it was an easy 3 kilometer hike to the river.  I’d like to know that writer’s definition of difficult.

Challenging would be a better term to describe the hike.  While the path was well traveled it was pretty much straight up.   Each time we got to what we believed was the top of the hill, the trail would simply turn and the mountains would get higher.  That being said it was gorgeous and we were blessed with yet another temperate, sunny day.  Eventually the trail leveled off in a mountaintop valley.  There was a river running through it but no one swimming or indication that it was in any way heated.  Ahead we saw large clouds of steam and assumed that’s were all the geothermal action was.    Before entering into the fog, we passed several bubbling pools.  I’m not sure if they were safe to soak in.  We figured if we didn’t see other people in them, then we wouldn’t be the first idiots to try. 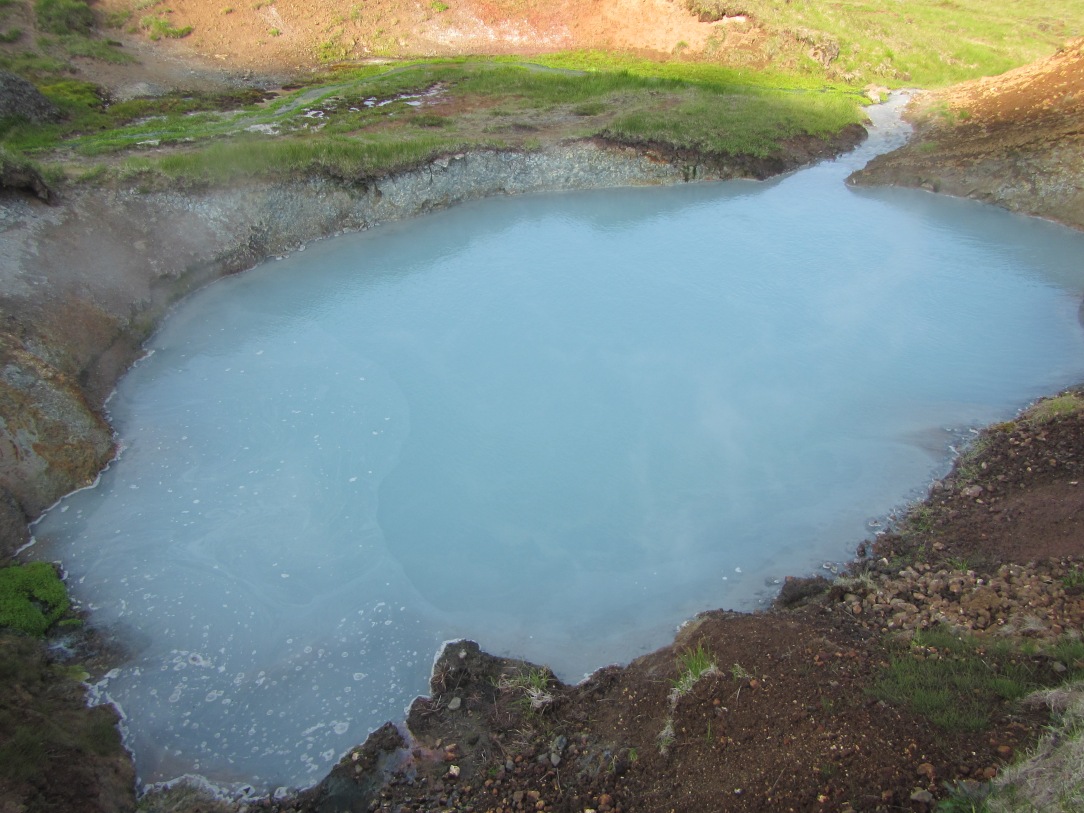 Passing through the clouds of steam and emerging from the other side, I swear, was like a movie moment come to life (albeit a movie moment that had the distinctive sulfuric smell of rotten eggs).  There in front of us was the hot spring river.  We knew we’d made it by the groups of people soaking and lounging on the sides.

Someone had obviously dammed up the river in several places to make pools suitable for bathing.  We found one that was relatively empty and got in.  It was as great and relaxing as you’d imagine.  While there was definitely a decent sized crowd there, I was shocked it wasn’t more crowded.   I was also surprised at how few people had picnic lunches, coolers, alcohol, or music.  Maybe Icelanders are just more respectful then Americans, but had I known how great this hot spring river was I would have made sure to pack some food and beverages and spent a couple of hours, or even made preparations to camp there.   We weren’t prepared for how long or steep the hike was and ended up leaving mainly because we were starving. Now, because I’ve been getting this question a lot: despite the perception of European’s penchant for nudity the majority of the bathers near us were closed.  However, the majority of them also didn’t have a problem changing from their bathing suits back into their hiking gear in full view of everyone.  I just figured I’d warn you that if you go to the hot spring river you’ll ostentatiously be viewing some genitalia.

The thing about there being sunlight all day is that you really lose track of time.  You don’t have to start saying to yourself around 7, we better start heading back before it gets dark, because it’s always light which leads to a really detached view of the time.  You’re body says you’re tired but what you’re seeing around you is telling you you shouldn’t be.  It’s very confusing.  We got back to Reykjavik around 8:30 and went down by the harbor to Icelandic Fish and Chips for dinner.  I had the titular fish and tips while Katelyn got langoustines, a tiny Icelandic lobster that was steamed in butter and garlic and that I was pissed I didn’t get.  Afterwards, we returned to the hostel and got our first decent night of sleep since getting to Iceland.