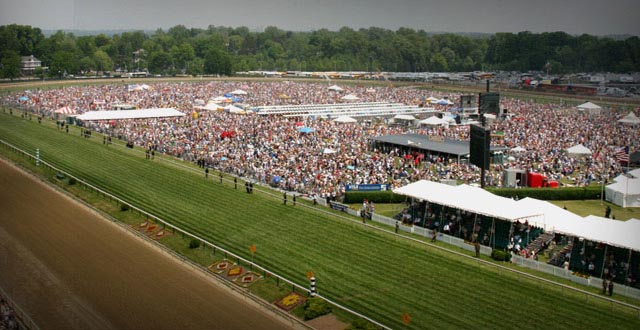 How to Survive The Preakness

Two years ago one of my friends suggested we get a group together to go to the Preakness.  I’m not a huge fan of horse racing, and don’t gamble, so was reticent at first.  I was convinced once I realized  part of the Preakness experience was made up of things I love, namely day drinking and concerts.  We booked a bus tour through Phillytrips.com, which made the experience fun and easy.  Being that a lot of my friends are based in Philly, we didn’t have to spend any money on hotels or transportation.  The bus trip is running again this year.  I have yet to purchase my ticket as March hasn’t been kind to my bank account, and I’m seeing Bruce on Thursday night, but will be doing so the paycheck after that (or sooner if my pre-Bruce bar bill doesn’t careen out of control).  Update: ticket purchased. The trip costs $125.00 and includes transportation (coach bus) to and from Philly, beer and snacks on the bus, a free T-shirt (free clothing makes everything better), admission to the Preakness, and entry into the “mug club” which is essentially an all day open bar (beer only…and a commemorative mug and lanyard).

We had a blast our first year.  Despite a rough start (several of us, myself included decided ton indulge a bit too much the night before), we arrived in Preakness in good spirits and watched performances by Philly’s own Mr. Greengenes, The Zac Brown Band, and OAR.  I believe I bet on one race, and failed to see any horses.

With the smash success of our first outing, we decided to “Preak” again.  Last year, we got a much larger group assembled and stayed at my brother’s place in Media.  Instead of a few of us overindugling, we all did, and the ensuing rush to make the bus ontime resembled the “we slept in” montage from Home Alone. Fortunately the buses were a little late so we made it on time.  Having “learned” from the prior year, we brought along a bevy of coolers for the busride and proceeded to imbibe the entire ride down.  The problem is we’re getting old, and while last year’s afternoon was spent jamming out to “Chicken Fried” and “Crazy Game of Poker”, this year was spent with half our group lying in the shade arguing over bottled water as Train and Bruno Mars (who somewhat suprisingly was very impressive with a big band backing him) took the stage.  Instead of the lively bus ride back to Philly the year before, we spent this one passed out, sunburnt & hungover (although a group of us pulled a miracle comeback once we arrived back in Philly and spent the night raging at Tavern on Broad until last call).

I wasn’t sure about Preakness this year partially because of how quick we all died last year and partially because the musical acts are, for me at least, one of the highlights.  This year is Wiz Khalifa (who I’ll admit I know nothing about…more cool points lost with the students), and Maroon Five (who I’m on the fence about, even thought I’m a closeted “Move Like Jagger” fan).

What sadly swayed my opinion is that on one of the “smaller” stages will be The Darkness.  A nice daytime buzz rocking out to “I Believe in a Thing Called Love” sounds right up my alley.  Judge away.

I’d like to think my whole two forays into Preakness territory has made me something of an expert.  Let me impart my wisdom to you:

1) Take it easy Friday night: I can’t stress this one enough.  The bus for Philly trips leaves at 7:00AM in order to make it for Greengenes performance at 10.  That means, especially if you’re staying outside the city in Media or Manayunk,, you need at least a 6:00 AM ior earlier wake up call.  Preakness is an all day affair, and unless you get a hotel in Baltimore, you’re not going to be able to just go and crash at your hotel.  Napping on the grass is a viable option, but leads to severe sunburn and unflattering photographs.

2) Hydrate: The last two Preaknesses I’ve been to were sunny and 80, and you will be (don’t argue with me here) binge drinking.  I’ve never been as dehydrated as I was last year circa 3:00 in the afternoon.  Bottled water is available.  It’s a little pricey, but you won’t be spending any money on beer, so suck it up.

3) Stake out a spot for your group:  You’re allowed to bring chairs, blankets, and coolers (no alcohol though, they’ll check) into the infield.  Our mistake the past two years is not having a central meeting spot where we could sit, cool off,and meet up with each other.  Some people stake out a spot and hang there all day, but there’s a lot to do in the infield, and you’ll most likely want to wander.  My suggestion would be to have your group pool together some cash and purchase a cheap blanket and styrofoam cooler you don’t care about too much (in case you want to wander and someone decides to snatch your stuff).  You then have somewhere you could convene, lay down your friends who didn’t listen to this advice and pass out, and keep a cache of food.  We attempted to bring hoagies in a plastic bag, but someone got sick of carrying them from place to place and they perished sometime early afternoon.  You’ll be eating both lunch and dinner at the Preakness, so having a cheap alterantive for one might help save some dough.

4) Check out the stands: It’s way too easy to go to Preakness and bounce back and forth exclusively between the beer tents and the concerts, and miss everything else that’s going on (I repeat, I’ve yet to see a horse).   The Preakness will have your typical “carnival” food fare, but also has a bevy of legitimately good and interesting stands.  Last year we visited a Jagermeister tent which had different types of shots, I got a great lobstar roll for something like $6.00, and there’s plenty of crab products.  We even had oyster shooters, raw oyters in a shot of beer, which were supisingly good.   There’s also the horse betting that I’d explain if I knew anything about it.

5) Sunscreen:  The sunscreen might be more for my personal benefit as I’m Irish, English, and Lithuanian (google it), which doesn’t result in a sun friendly mutt.  I go from white to red pretty quickly, and my last two Preaknesses resulted in painful days following the event.

I’m also including to minimize your phone usage, because Preakness is big and crowded and it’s easy to get seperated from your friends.  The last thing you want is a dead phone, especially once your bus is set to leave.

We learned last year that the bus will leave you.  Happy Preaking.

2 comments on “How to Survive The Preakness”